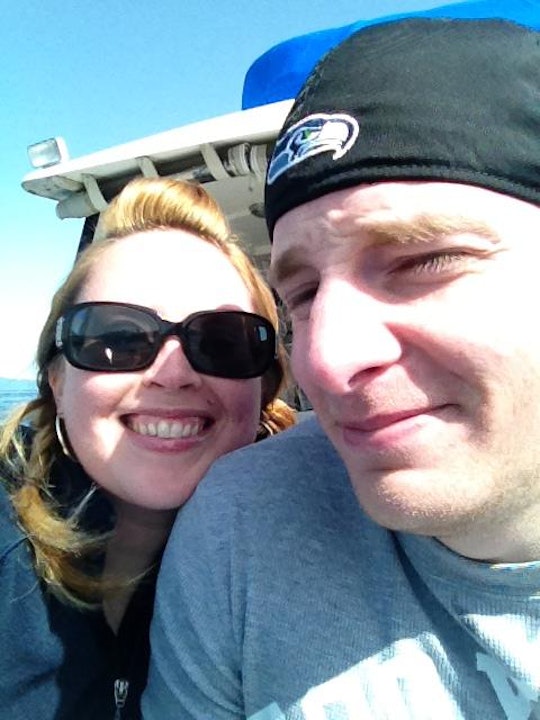 When my partner and I made the decision to add tiny human being to our lives, I didn't realize the uphill battle we'd face — or more accurately, the one I'd face. I didn't realize how hard getting pregnant when you have PCOS would be. In fact, I didn't realize the toll having Polycystic Ovaries Syndrome would take on my life even before adding a baby to the mix. Though there's no known cure for PCOS, the endocrine system disorder makes it harder for women with the disorder to get pregnant. Women with PCOS suffer from a hormonal imbalance that causes their ovaries to enlarge and collect fluids that may turn into cysts. It can also prevent natural ovulation. Life with PCOS also almost killed my dreams of becoming a mom.

I didn’t find out that I truly had PCOS until my mid-20s. I was at a consultation with a dermatologist to see if I was a candidate for Accutane, a prescription drug that would hopefully help eradicate my more-than-a-decade-long struggle with cystic acne. The nurse practitioner interviewed me and inspected my face, nonchalantly commenting that my acne was probably due to PCOS, though he never confirmed that I had it. (Nor did he care to confirm it.) As he explained PCOS to me, he casually added that if I decided to have kids, it’d be a long, uphill battle. I shrugged his comments off, not ready to plan that far into the future or worry about something I didn’t really care about.

Even though I wasn’t ready for kids yet, his warning didn’t leave me. I didn’t want to get pregnant at that very moment — my husband and I had been married six years, I was still finishing up my degree, and we were still figuring out how to be married — but what if I wanted them later on? Eventually, I stopped thinking about what the dermatologist had said. I joked with a friend how I didn’t care what he told me; he was only there to evaluate my face.

But I had no clue how fast and how fierce his words would come back to haunt me.

More than two years had passed, and sure enough, so much had changed. My husband and I were in a great place, I was almost done with college, and I had a job I loved. Life was good. The only thing missing was the child we’d been desperately trying to conceive. It had been six months, and every time we tried, we came up short.

After talking to my OB-GYN, he sent me for an ultrasound of my reproductive system. He knew my history of irregular and painful periods, and he also knew I’d been taking a prescription called Metformin, a medication typically used to treat diabetes, though I was using it to help keep my periods regular. He could track and treat everything happening on the outside, but what was going wrong inside?

The ultrasound only confirmed what that dermatologist assumed two years before: I had PCOS. Everything — my first period at 12 to my most recent at 27, the excruciating periods that put me in the ER, my weight issues, my acne — had been because of my PCOS. I cursed the time I’d wasted not knowing, all those years I’d spent running from that derm’s warning.

I wasn’t ovulating, so my OB and I talked options. It was probably the most important conversation we’d have, and at that time, I didn’t understand the importance of having a doctor who respected, trusted, and listened to my needs. I wanted to go on a medication called Clomid that would force my ovulation. He advised against it, suggesting instead that I try to lose weight instead. What he didn’t know is that I had been trying to lose weight. I’d made changes to my diet and was working out routinely, but nothing was working. The irony was thick: Weight gain is a symptom of PCOS, making what he was asking of me even harder than it already was.

I was graduating with my business degree, my marriage was blossoming, and we were happy. It felt like, for the first time, things were falling into place. Did a baby even matter anymore?

After three months had passed a good friend finally encouraged me to go back to the doctor — a different one this time. I’d finally found an OB-GYN to be my advocate and not my adversary. He believed that my former OB-GYN likely didn’t want to give me the Clomid because of how closely he’d need to track my progress when he already had a full patient schedule. I'm not sure that was the case or not, but even the notion that that could've been the case still hangs heavy on my heart.

My first two rounds of Clomid were depressingly unsuccessful. After each round I’d take labs to see if ovulation had occurred, and each time I’d show less than a one percent chance of ovulating. News of our second failed attempt happened right before Mother’s Day. The holiday only served as a reminder of the role I’d never get a chance to own.

I had all but stopped caring about getting pregnant when my husband and I geared up for our third round of Clomid. I was graduating with my business degree, my marriage was blossoming, and we were happy. It felt like, for the first time, things were falling into place. Did a baby even matter anymore?

Apparently, it did. We found out I was pregnant on my graduation day.

I took six pregnancy tests and even asked a friend to take one too. I wanted to be certain it was real and not just a mistake. I couldn’t take another notch on the “things my body can’t do” belt. But that faded pink line was not a figment of my imagination. It was real. After more than a year of trying to conceive, a doctor that didn’t understand my wishes, and a body that needed all the help it could get, our wish came true.

My pregnancy would go mostly smooth, and after 39 weeks, on February 28, 2013, we met our miracle baby, the one we thought we’d never have. She is 2-and-half years old now, and everyday I am so thankful for her. The struggle to conceive her was so emotionally painful, but when I look at her, I know it was all worth it.

I spent so much time beating myself up and crying about how my body couldn’t do the one thing it was biologically designed for. But I know those negative thoughts didn’t help me. They didn’t undo the stress that I put on myself. They only made it worse. Now, instead of dwelling on what I could never control, I remind myself that the uphill battle does not mean automatic defeat. It doesn’t mean I am broken or a failure. It just means I’ll remember to stop, smell the flowers, and appreciate the view from the top.