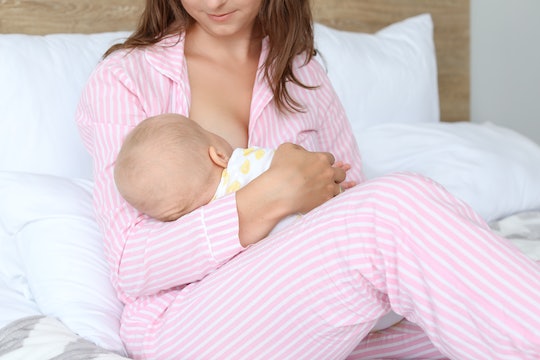 How Your Postpartum Breast Changes Relate To Breast Cancer, According To Experts

Unfortunately, breast cancer runs in my family. My grandmother has had it, my mom has had it, my aunt has had it. So I'm super paranoid about getting it. I was very curious when I was pregnant about the changes to my breasts and what that could potentially mean. I mean, how breast density changes postpartum feels like it could have some correlation to your risk of breast cancer, doesn't it?

Apparently, during pregnancy and postpartum, your breasts do become denser — as long as you’re breastfeeding — Dr. Idries Abdur-Rahman, OB-GYN, author of Everything You Ever Wanted to Know About Pregnancy (But Were Too Afraid or Embarrassed To Ask) and one half of the Twin Doctors for TwinDoctorsTV tells Romper. “Breasts have three primary components — fat tissue, lobules (where milk is produced), and the ducts that carry milk from the lobule to the nipple. As the hormones (estrogen, progesterone, and prolactin) increase during pregnancy, the lobules enlarge in preparation for lactation. This enlargement is responsible for the increases in the density of the breasts."

As this pertains to breast cancer, even though your breasts do get denser, there are studies that show breastfeeding actually lowers your risk for breast cancer, according to Abdur-Rahman. “In addition to lowering the risk of breast cancer, pregnancy and breastfeeding also lowers a woman’s overall risk of ovarian cancer. During pregnancy and usually while exclusively breastfeeding, women do not ovulate and therefore do not cycle. This keeps levels of estrogen and progesterone lower than at other times in their reproductive lives. This lower lifetime exposure to hormones lowers the risk of both breast and ovarian cancers.”

Thankfully, your breasts do go back to normal once you’re done breastfeeding or no longer pregnant. But as far as breast density and breast cancer goes, there are a few risks according to experts. To put it simply, having dense breasts means you have a lot of "glandular tissue," according to the National Cancer Institute's website. And when that density increases, it can affect your screenings.

Masking has to do with how well doctors can see cancer cells during a mammogram on someone who has very dense breasts. “Because breast cancers appear ‘white’ on a mammogram, cancers are more easily detected in fatty tissue (higher sensitivity). At the other end of the spectrum, cancers may ‘hide’ as breast density increases. Since 60 percent of premenopausal women tend to have predominantly dense (white) tissue mammographically, the efficacy and sensitivity of a mammogram’s detection of cancers will be lower in younger women,” Reitherman says.

So while your breast density changes during pregnancy and postpartum, luckily, your breasts will go back to their normal density postpartum, and after you’ve weaned your baby if you’re exclusively breastfeeding. As for the size and shape of your breasts after you’ve weaned, well, I can’t help you there. Mine have definitely changed in shape to say the least. But at least as far as getting breast cancer goes, it doesn’t necessarily give you a higher risk — in fact, breastfeeding and pregnancy can lower your risk.