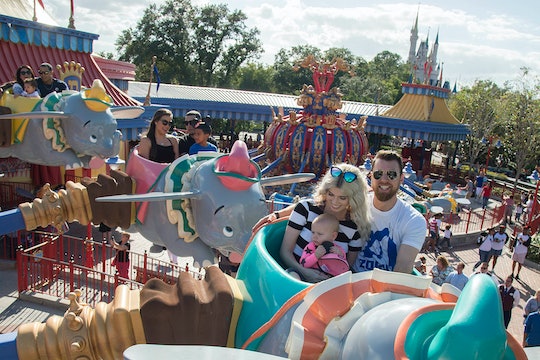 How Rich People Max Out Their Disney Experiences

Is there a side door to Disney? We all enter through the same gates, blopping our RFID chips against the scanner, but once you are inside, Disney’s parks allow for a stratified VIP experience, depending on how much money you have, and how intensely you have planned your getaway with the Mouse. Where once just going was the ticket, families are spending more and more on “enchanted extras.”

Entire careers have been devoted to the psychology of Disney and what makes the empire so addictive. Families chronicle how much they spent and Facebook groups with thousands of members swap ideas on how to find the most over-the-top extras, where to eat, and more. The cost of Disney parks has risen sharply in the last decade, and daily admission is currently $109. Gone are the simple days of just walking up to the gate and purchasing a ticket and a pair of mouse ears. Now most families engage in some serious planning before being wished a "magical day."

The separately ticketed events or add-on experiences are where most families look to add unique memories — at a steep cost. The most widely known, the Bibbidi Bobbidi Boutique, can be enjoyed for $65 per child — but quickly books out. Parents are able to upgrade for $450 per princess to the Princess Signature Dress Collection experience, where they will leave with not only a makeover but a princess dress sewn of heirloom fabric and a genuine crystal tiara. Instagram-worthy? Absolutely.

Other popular, separately ticketed events include the 7-hour Backstage Magic tour for $275 per person, where guests 16 and older can explore all the inner workings of the Magic Kingdom, Epcot, and the Animal Kingdom. A chance to explore the utilidor — the network of passages the park is built on top of — is the ultimate VIP treatment.

One family of seven that I spoke to spend around $32,000 on their annual trip, which allows them to stay at the premium resorts and experience many of the “extras” the park has to offer. They’ve stayed in cabins at the Wilderness Lodge and bungalows at The Polynesian. Full kitchens, plunge pools, TVs in the bathroom mirrors, and turndown services with piles of chocolate are all part of the experience. They have three children on the autism spectrum, so also love that they are able to utilize the Disability Awareness Pass for their kids. The extras that they spend for conveniences make the trip more doable in terms of their children’s needs, as well.

“It is nice to have the room to spread out. We could do a smaller room for a shorter stay, but not for a week,” says Cindy.* Using mobile ordering to have their food ready when they sit down has also helped their children with navigating a busy day at the parks, as have headphones and handheld devices. They always use a licensed Disney planner. “I know so much about Disney now,” says Cindy, “but I just feel better using our planner’s services. It is like a security blanket.”

On the ground in Orlando, a VIP guide can get you through the parks faster, acting like a human FastPass, but costs a minimum of $1890 for six hours (in addition to park admission), according to Fodor’s. In defense of the price tag, to get VIP guide status, candidates have to study and pass a test.

As I say, the VIP Disney experience is serious business.

For VIPs with a healthy appetite, 21 Royal, a secret dining suite at Disneyland, offers meals at $15,000 a head, as Eater reports, and follows in the tradition of Club 33, a private club dating back to 1967, according to Thrillist, reportedly with a $50,000 initiation fee. (Requests for comment from Disney were met with an autoreply: "Thank you for your interest in Club 33 at Walt Disney World Resort. As membership opportunities are evaluated, Club 33 may contact you for further information.")

Twenty-four thousand dollars in, they will be able to use the timeshare with their family to save on future trips.

Affecting the tiniest VIPs, Disney cracked down this year on oversize strollers — the policy change notably impacted the Cinderella carriage-style rentals available from Fantasy Strollers at $132 for an 8-hour rental. In late April, Fantasy Strollers will debut smaller carriages that meet the size restriction, meaning the magical experience can roll on.

For those not intent on serving as footman for a tiny princess, adults-only Disney trips are a growing trend, in part due to loosened alcohol restrictions. Why would adults go to a cartoon-character themed park sans kiddos? Apparently, for a ton of reasons, the new vodka or Moscato twist on the classic Dole Whip being reason number one.

Ken and Dilanthi,* a Baltimore couple with a toddler, have been to Disney five times, and have yet to take their kid with them. When they got married in 2009. they purchased a Disney timeshare. They’ve paid around $200 per month for the last decade, and are close to paying it off. Twenty-four thousand dollars in, they will be able to use the timeshare with their family to save on future trips.

“We went for our honeymoon, we went for our 1-year, went for our 4-year, our 6-year, and are going again this year for our 10-year,” Dilanthi tells me. “We are leaving our son at home again this time. We are those weirdos that love Disney so much… we do whatever we want. I honestly can’t even imagine bringing kids because it’s going to cramp our style!”

They have alcohol delivered right to their villa through Drizly — a life-changing hack.

They do plan to bring their son when he’s a bit older, and know those trips will look different. For now, their toddler gets indulged by grandma while they have the time of their lives. The couple gets a one-bedroom villa at The Boardwalk, a hotspot for Disney nightlife. Their favorite drinking hole is Atlantic Dance Hall. “We have a ball. We never go dancing in real life, but if we are at Disney…”

They have alcohol delivered right to their villa through Drizly — a life-changing hack.

“Even with the timeshare, we are paying several thousand every time we go for flights, food, et cetera. So we save a little on alcohol,” says Dilanthi.

Some days they just lay by the pool and check out a Disney movie for free from the resort. Going so often, they don’t feel compelled to squeeze in every little thing. “It actually feels relaxing.”

Adults traveling alone or using the on-site babysitting services often squeeze in the world-class spa at the Grand Floridian. Massage prices range from $135 for a basic massage to over $400 for the most luxurious package. Pedicures start at $75, and a couple’s massage/pedicure package runs $425. It makes total sense why more couples are choosing to leave the kids behind.

You might wonder how people can even manage to spend $32,000 on a single trip, but Nikki Pride, a mother of two in Lebanon, Illinois, is a good example of how even budget planning adds up. She and her sisters planned a 5-day trip for five adults and six kids that cost $4,000 for her family, inclusive of a 15- passenger van rental, hotel stay, gas and food. “It didn’t feel like a budget vacay at all,” she says. “It was perfect for us.”

The Pride family stayed off-site at Barefoot Suites and traveled daily to the parks. They received a discount off their hotel stay by listening to a 2-hour timeshare presentation.

For those of us without a private money bin, the good news is that some of the best-kept secrets at Disney don’t require a platinum Visa card.

Deb and Susan Whitewood of Pittsburgh, Pennsylvania, have discovered a unique experience that includes an opportunity to cook s’mores with Chip n’ Dale at a roaring campfire and watch movies under the stars: for $60 a night, they stay at Fort Wilderness, Disney’s campground. And as it turns out, the cheapest accommodation is something of an exclusive. “It takes a lot of planning,” warns Deb, because “it books up to two years in advance.”

*Not their actual name.

Top image: In this handout photo provided by Disney Parks, world champions (front to back) MVP Ben Zobrist, Javier Baez and Addison Russell, of the Chicago Cubs, take flight with their families aboard Dumbo the Flying Elephant at Magic Kingdom Park on November 5, 2016 in Lake Buena Vista, Florida. The players were later honored among thousands of fans in a parade at Walt Disney World celebrating the team's historic victory. (Photo by Preston Mack/Disney Parks via Getty Images)