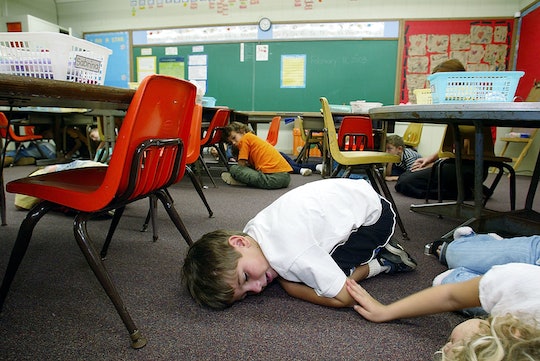 Marjory Stoneman Douglas High School, site of the seventh deadly school shooting in the United States in 2018 alone (let us remember for a second that it’s only March) shook up the entire nation. But if you happen to be a parent, you were especially scared — scared for your son or daughter who sits defenseless trying to gain an education at the mercy of any potential attacker who decides it’s their moment to shine. As the nation again debates gun regulation measures, this time with the brave students of Parkland, Florida, leading the way, the question remains: What can we do in the meantime? How well protected are schools against a shooting threat in the future? What is being done to protect these students, teachers and faculty?

The cold-hard reality and the answer to this question is not much. The majority of schools are not protected, according to Ross Vierra, a former Navy officer and now CEO of ASI Security. He explains that, as more active shooter scenarios become prevalent in our culture, schools have started to take action and have trained staff. However, due to budget constraints and lack of resources, they are slow to introduce the technology and resources that are available.

“The technology is out there and can reduce the timeline or the possibility of a threat occurring, including integrating security technology, axis control, intercom, closed circuit TVs and active shooter detection systems,” he says. “These resources are available to the educational sector, but they just aren't using it.” But why?

According to Michael Julian, an active-shooter-survival training instructor who teaches courses to various organizations across the country, the biggest roadblock is that many schools do not have armed adults with the ability to stop an active killer. In addition, most teachers and students are not trained on how to respond to an active killer — and many simply don’t think it could ever happen to them. “The only time active killer events have been prevented are when a student or resource officer was able to subdue the would-be killer before the shooting began,” he says. “[It’s] time to educate everyone on what is happening and why and start teaching how to recognize the warning signs and to notify someone that can intervene.”

While there’s no easy way to protect against an active shooter threat, there are strategies that can be put into place to block them. Brian N. Moore, program manager of School Climate & Discipline at the Delaware Department of Education, believes this starts with securing entrances and closing campuses so that an outsider would at least have to communicate with the office to gain access to the school. “While this system was in place in some of the schools where attacks occurred, they also slowed the threat down,” he says.

Matt C. Pinsker, an adjunct professor at Virginia Commonwealth University who teaches homeland security and criminal justice, agrees that locked doors are one proven deterrent, noting that the doors to classrooms are increasingly constructed out of bullet-resistant material and installed in a manner where they can be secured from the inside and keep an armed-intruder out of a classroom. “This was a lesson learned after Virginia Tech, where students tried barricading a door,” he says.

The next line of defense is enforcing the practice of active-shooter drills that teach students and teachers how to respond in the event of a school shooting. Just as schools have regular fire drills, these would be put in place on a rotating schedule. Laura Carno, executive director of FASTER Colorado, an organization that trains teachers and other school staff members who have been authorized by their school districts to be armed first responders on their K-12 campus, says these drills are already starting to crop up in schools across the nation. “These drills [that] allow students and staff to practice techniques like lockdowns, evacuations and sheltering in place,” she says. “While these drills are important, schools should also ask the question: What if, despite all the safeguards and training, a bad guy gets in anyway? Who is going to stop him?”

Training both students and staff to think about the unimaginable is no easy feat, but experts agree that preparedness is what will inevitably prevent the extensiveness, both in terms of frequency and the amount of casualties, of these active-shooter scenarios. “Planning means not burying our heads in the sand but acknowledging that this tragic trend does not show any signs of slowing, so our only recourse is to increase our level of preparedness and preparation,” says Moore.

He also feels strongly that schools need to be more aware of threat assessments and how they are performed. “There are generally small signs of a shooter in the research and planning stages of an attack,” he says. “Faculty members need to take the ‘if you see something, say something’ mentality and let administration know if one of their students displays a keen interest in weapons or acts of violence.” He adds the notion that any little clue should be shared so that a student who is in the fantasy phase of an attack can be addressed and helped before they act on their fantasy.

And, last but not least, there’s the topic of having a permanent, fully armed law enforcement present on school grounds. Carno says that this is already starting to take effect, with many schools without armed resources (think smaller, rural schools) supplementing with armed staff who conceal-carry on campus. “Those staff members get a significant amount of training and typically re-certify every year,” she says. “Some schools in more urban or high-crime areas have even installed TSA-style metal detectors to ensure firearms are not brought in to the buildings.”

Alissa Parker and Michele Gay founded Safe and Sound Schools after losing children to the Sandy Hook Elementary School shooting. Gay told Romper in 2017 that, after the tragedy, “We would go to these meetings with the police department, the families, and we would hear an update on what happened. … Over and over again we kept saying, ‘I wish we would have known this. People need to know this.’ Safe and Sound Schools has created the Straight ‘A’ Safety Improvement Model, that implores schools to assess, act, and audit their safety procedures and mechanisms. Parker and Gay want to encourage parents to get involved in their local schools and communities.

At the end of the day, it is scary to consider — even the talk of planned action against these situations. Everyone would prefer to focus on how we can prevent these incidents and what the government can do to protect our students. But the government is not in each and every one of these schools day in and day out — the students, teachers and the faculty are. Moore believes that a school can never truly be fully protected against an attack. Instead, all they can do is to plan and create as many physical and mental barriers against an attack and train and equip staff to effectively respond and reduce the deadly impact of an attack once it occurs. “By training staff members to quickly look at the situation and take definitive action quickly can we reduce the impact and reduce the number of fatalities,” he says.