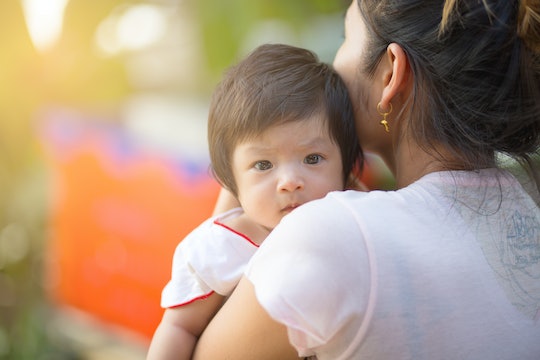 How Separating Kids From Their Mother Impacts Them Later In Life, According Experts

Watching the news coverage of immigrant children being separated from their parents at the border has been absolutely gut-wrenching. My heart breaks for the young children trying to comprehend the incomprehensible. While it's horrendous to see this play out in real-time, the long-term effects of this crisis are perhaps even more devastating. Many are wondering how separating a child from their mother will impact them later in life.

The accumulated adversities these children are experiencing will have a cascade of serious long-term effects, says Heather Larkin, PhD, an Associate Professor in Social Welfare at the University at Albany and Co-Director of the National Center for Excellence in Homeless Services, in an interview with Romper.

Despite President Trump signing an executive order this week to end the policy of separating families, no details have been released on how he plans to keep the families together, reported The Wall Street Journal. There are 2,342 immigrant children separated from their parents at the United States border, according to NPR, and in that detained environment they are rapidly accumulating what Dr. Larkin refers to as "adverse childhood experiences (ACE)."

"A vast body of research on ACE reveals powerful relationships between accumulated early life adversities, including loss of a parent, with serious, high cost health and social problems later in life," explains Dr. Larkin. "This includes everything from major depression, anxiety, and substance abuse to an increased likelihood of contracting sexual transmitted diseases or becoming a teenage parent. It's even linked to different types of cancer and early death."

Another critical point is that these children have already endured adverse childhood experiences, like the violence in their own countries that warranted their parents fleeing in the first place. "It took a lot for their families to decide that they needed to bring them to another country, and who knows what they went through to get here, and then when they get here, instead of having a trauma-informed approach to helping the family, there's now another adversity happening to them when they arrive," says Dr. Larkin. "The last thing they need is for them to be taken away from their parents. They need to be helped to feel safe so their development is not impaired."

Pediatricians and psychologists say that this catastrophic situation will have lasting neurobiological consequences on the children. "[The child's] body releases a flood of stress hormones such as cortisol and adrenaline. Those stress hormones can start killing off dendrites — the little branches in brain cells that transmit mes­sages. In time, the stress can start killing off neurons and — especially in young children — wreaking dramatic and long-term damage, both psychologically and to the physical structure of the brain," reported The Washington Post.

The stakes are high to get these children help — and fast. Thankfully, numerous non-profit organizations are mobilizing to raise funds and collect essential goods, like diapers, formula and clothing, for the children, according to a previous Romper article.

While the separation of migrant families is itself incredibly appalling, it appears that it's also having a ripple effect throughout other communities. "Aside from children directly impacted by enforcement, are children who are indirectly impacted, a much wider group. This includes a large number of U.S. citizen children, those living in mixed status families and those who have even just one immigrant parent. These children describe fears of separation from their parents even in some cases when their parents have migrated legally," according to Dr. Joanna Dreby, an Associate Professor of Sociology at the University at Albany.

In the coming days, hopefully a more detailed plan will emerge from the Trump administration about how the migrant families will be treated moving forward. I hope it's infinitely more humane, and in the words of Dr. Larkin, "helpful instead of harmful."

More Like This
17 Best Potty Training Products For Toddlers
From Captions To Gifts, These Are All The Kindergarten Graduation Ideas You Need
34 Instagram Captions Perfect For Preschool Graduation Photos
26 Toddler Lunch Ideas They’ll Actually Be Excited To Eat