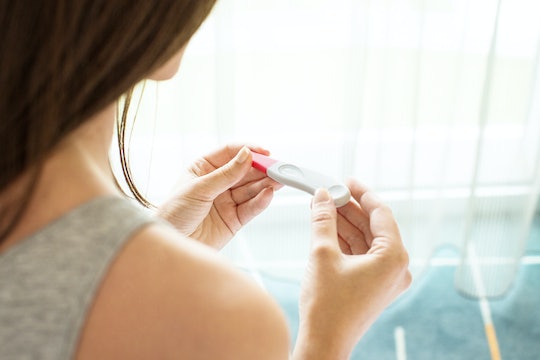 Here's When You Can *Officially* Get A Positive Pregnancy Test

If you've been trying to conceive for any length of time, you're probably pretty good at taking pregnancy tests by now. You know which ones are the easiest to read, which ones go on sale the most often, and which ones are hardest to hide in your purse if you buy it on your lunch break. What you may be less familiar with is the way they work, and how much science goes into that one little stick. You may always wait until you miss your period, but is that necessary? How soon can you get a positive pregnancy test result from a home pregnancy test?

Whether you've been timing ovulation or just want a general date to work with, there is a magic time period to get your positive pregnancy test — the first day of your missed period, according to the Mayo Clinic. By then, there should be enough human chorionic gonadotropin (hCG), the pregnancy hormone, in your urine to be detected by most brands of pregnancy test, even the ones from the dollar store that require using a pipette and cup. However messy, they are likely just as accurate at that point.

I know — who wants to wait that long? But this timeline can save you some stress and confusion. The Mayo Clinic cautioned against testing too early as very early miscarriages, sometimes referred to as chemical pregnancies, often resolve themselves before you would miss your period, and then you bleed as you would normally. This wouldn't be an upsetting occurrence if you hadn't tested early, because you'd never know. The Mayo Clinic suggested that these may happen more frequently than you'd expect, given the unpredictable nature of early pregnancy.

Honestly, home pregnancy tests pack quite a lot of scientific work into a tiny white stick. HCG is a pregnancy specific hormone responsible for forming the placenta in the uterus, noted Reproductive Biology and Endocrinology. While it may appear in some fertility and diet medication, at no other point in your life will you produce this hormone other than when you're pregnant. Some home pregnancy tests can detect a pregnancy with reasonable accuracy fairly early after fertilization has occurred, or about five days before you miss your period, noted Craig Medical. That is because the most sensitive tests require very little hCG — about 20 mIU of hCG per milliliter of urine. Since the hCG will double every two days for the first four weeks of pregnancy, it only takes a matter of a week to go from the most sensitive tests on the market to the least sensitive in terms of accuracy.

Why are some so much more sensitive than the others? It's all about the technology. While much of the standard supplies are the same, the proprietary formation and manufacturing of these tests are not. Some are more sensitive simply because they use a higher quality mechanism to detect the hCG. That doesn't mean that a cheap test is an ineffective test, it just means that it may not be effective yet, if you haven't missed your period. Digital and name brand tests, from what I've noticed, and from lab results, tend to be the best performing, readily available tests on the market. The most sensitive are typically strip tests that are used in doctor's offices, according to the lab results.

If you think you're pregnant, or you're just extremely anxious to test, you can definitely try, but know the risks, and understand that it might take longer to test positive for pregnancy than you think.