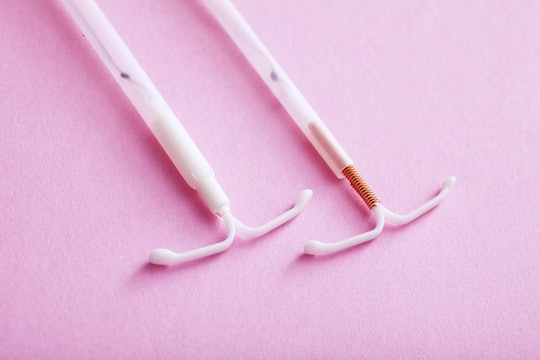 If You Want An IUD After Giving Birth, You'll Like This News

If you're currently pregnant, it's probably been a while since you had to worry about birth control. But within just a few weeks of having your baby, you'll most likely get the green light to start having sex again, which of course means you could very easily get pregnant again. If the prospect of back-to-back babies doesn't appeal to you, you'll want to make sure you've got a plan in place. One option is an intrauterine device, or IUD, which can offer years of protection. But how soon can you get an IUD after having a baby? Here's what you'll need to know.

First, the basic of this birth control method. An IUD can prevent pregnancies for a few years after you get one implanted. According to the American Congress of Obstetricians and Gynecologists, a hormonal IUD should be effective for three to five years, while a copper IUD could cover you for up to a decade. You might want to use a backup method of protection after you get one, according to Planned Parenthood, because it may take a little time to start working.

But you may not need to wait to get it. According to Baby Center, you can safely have an IUD inserted right after you give birth, regardless of whether your delivery was vaginal or via C-section. In fact, TIME noted that the practice is actually becoming more common, in part because getting pregnant again shortly after giving birth comes with some increased risks for complications. Having an IUD implanted right away is also a good option for women who might lack the time or resources to make it to a follow up appointment a few weeks after birth. But Fit Pregnancy noted that even though it's safe to get an IUD right away, some doctors might prefer to wait until you're six weeks postpartum.

There are also some potential side effects of having an IUD put in immediately after birth to consider. According to Self, there's a higher chance of your IUD falling out when you have it put in right away. It could also make your postpartum bleeding a bit worse. That may be a small price to pay, however, for knowing you won't have to worry about another pregnancy again so soon.