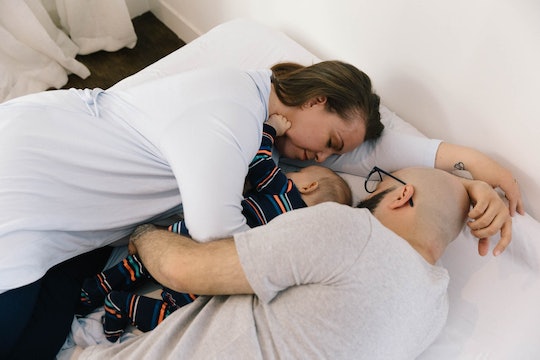 How Strong Couples Keep Their Sex Life Alive While Co-Sleeping

I didn't co-sleep with my child as an infant, but when my son was about a year old, he started sleeping in my bed more frequently as my husband's job kept him away. When he was home, however, sex was challenging. (As you can expect it to be when there's a toddler taking up half of the bed.) For us, figuring out how strong couples keep their sex life alive while co-sleeping was as much about creativity as it was about determination.

There is a dearth of research on how co-sleeping affects the sex life of the parents. This is likely due to the fact that co-sleeping is so controversial. However, not everyone who co-sleeps bed shares, and while controversial, it's actually increasingly common, especially in the United States.

But there are strategies you can employ that will make your sex life spunkier even when you co-sleep. Trust me, it's all about being spontaneous and fun. For us, we just accepted the fact that having sex in our bed wasn't going to happen. We had to learn ways to work around our new normal, and our new baby, because, honestly, when you're doing it all as a mom, sometimes it's just easier to snuggle with your toddler and fall asleep fast and hard.

My husband and I never had sex in the same bed as our son or daughter, and we also didn't hurt for sex during that time. What we did do was have a lot of guest room sex, sofa sex, the occasional "bend over the kitchen table" sex, and date night sex.

Of all of these, guest room and date night sex were our favorites. If you're fortunate enough to have grandparents or aunts who can take your child overnight or for a few hours occasionally, take them up on it. Even if you've only got three hours, that's a few hours of solid naked time with enough time left over to inhale some Chipotle or hit Target. If you get four hours, you can have burritos, sex, and Target. Sure, it's not as fancy as when you were dating, but you have to admit that Target is life now.

We also spent a lot of time sexting. It really revs your engines so that by the time you get to do the deed, any hallway/bathroom/solid surface will do. But more than anything, we made our needs as a couple a priority in our marriage. Sure, it was only on really special nights that we got to hang on like Sting and Trudie (OK, we've never had that stamina, and there are books to be read and shows about people in Alaska to be watched), but we came together as a couple knowing that it was an important part of our marriage.

Sex while co-sleeping isn't impossible. It's hard, but it's doable. (That's what she said.) You just have to think outside of the box (in this case, the box is the bedroom) and carve out the time for intimacy. Honestly, it can make sex even more of a priority when you really have to make the time for it rather than just rolling over in the night. Your kid probably won't sleep between you forever, so enjoy the intimate, creative romps, and end the night with lots of family snuggles.