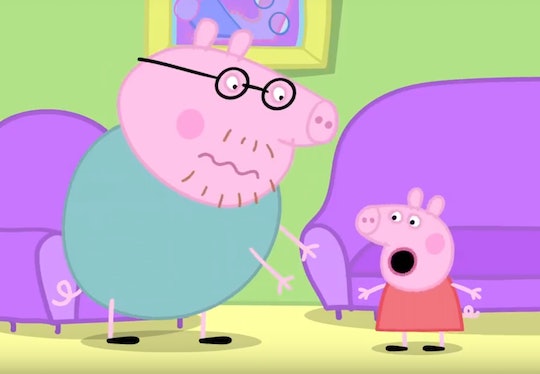 OK... Is Peppa Pig Actually A Cartoon Giant? An Investigation...

If you have kids, or spend time around kids, you're probably deeply immersed in the world of Peppa Pig. Not only is Peppa Pig the star of her own cartoon series, she's a certified mogul. Her likeness appears on clothes and accessories, and she recently dropped her first collection of music. Through all this, fans have gotten a pretty good sense of who Peppa Pig is. There are, however, some unanswered questions about the beloved cartoon piggy. Like, how tall is Peppa Pig exactly? Turns out the topic of the adorable swine's height has recently gone viral.

Now, if you're sitting there asking yourself why on Earth people are questioning Peppa's height, you're probably not alone. She is, after all, a largely two-dimensional character who appears extremely small on television. So what gives?

Well, one particularly curious Twitter user, @Memeulous, appears to have done a little digging into Peppa's height on Google and found that while the Peppa Pig star looks tiny on the show, the tweet suggests she's 7 feel 1 inch tall, which is the same height as former professional basketball star Shaquille O'Neil, as the CBC noted. I know — I was shocked, too. Peppa has almost three full feet on me.

The reveal prompted some hilarious reactions online, which I encourage you to enjoy.

"Need a man who's the same height as peppa pig please," another quipped.

"if ur not peppa pig's height, swipe left," a third Twitter user cracked.

"Everyone is scared of peppa pigs height but have we forgotten about Clifford," another wrote.

While most people were busy joking about Peppa's somewhat terrifying size, others brought up an important point. If Peppa Pig is 7 foot 1 inch tall, how tall is Daddy Pig?

The pair frequently appear together in episodes of Peppa Pig, showing Daddy Pig towering over his daughter. One fan, as The Sun reported, did some calculations and both Daddy and Mummy Pig might be equally gigantic. The Twitter mathematician speculated that Daddy Pig would stand about 14 feet 2 inches tall while Mummy Pig would clock in at 11 feet 6 inches. That makes Peppa's supposed 7 feet look like nothing, TBH.

If you're feeling a little freaked out about watching Peppa Pig with your kids tonight, fear not. It appears it's probably not a show about a family of giant pigs.

While Entertainment One, the production company behind the Peppa Pig, did not immediately return Romper's request for comment on the topic, a Google search on Peppa Pig's height did not turn up any frightening results. Additionally, a few episode of Peppa Pig feature humans, such as Santa Claus and the Queen, who's based off of Queen Elizabeth II, who's just over 5 feet tall. In the episode, Peppa Meets the Queen!, Peppa and the rest of the animals appear to be a lot smaller than the monarch.

So while this whole thing may have been an elaborate, viral hoax, I've got to admit that the results were hilarious and almost as enjoyable as her new album. So pop in your Peppa Pig: My First Album disk, or order it now for you and your kids, and jam out to the sweet melodies of "Bing Bong Zoo," "Rainbow Rainbow," and "Jumping in Muddy Puddles." HuffPost Canada reported that the album is doing great so far. It's got a five star rating on iTunes and has received rave reviews. In fact, as noted by the outlet, one reviewer said it was "better than any Drake album," which is pretty serious.

TBH, I'm kind of bummed Peppa Pig and her family aren't gigantic. It was fun while it lasted though.

More Like This
Eagles Coach Nick Sirianni Brought His Kids To A Press Conference & It Was Hilarious
The Purple Wiggle Is A Total Thirst Trap & Moms Are Drinking Him Up
Exclusive: Watch How A Group Of Princesses Save The Day In Netflix's New Animated Series
Harrison Ford Is A Proud Dad Of 5 Kids Who Are More Than 30 Years Apart
What Parents Are Talking About — Delivered Straight To Your Inbox