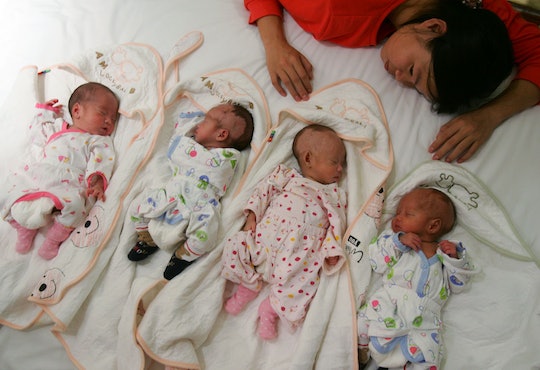 Everyone knows that sleep is precious, but when you become a parent, it becomes an unattainable luxury. A new study published this week proved that's especially true for women with kids. According to the findings, mothers tend to lose more sleep than men with kids and women without children. But the research has also raised questions over how the gender sleep gap affects working moms.

Reasons on why the gender sleep gap exists have swirled around since the study was released on Monday. A prevailing theory is that women with kids are getting less shuteye because, as the Pew Research Center found, moms bear the brunt of household responsibilities. Although chore distribution is uneven for all moms, researchers at Georgia Southern University discovered that mothers who work are far more likely to be sleep-deprived than mothers who didn't, according to LearnVest.

This is actually old news. Previous research has proven that working moms walk around exhausted more so than dads. A 2010 University of Michigan study found that mothers who work were two-and-a-half times as likely as working fathers to lose sleep in order to take care of their children. And no wonder: A 2015 Worker Mother Research Institute survey found, in addition to their job duties, working moms in dual-income households also had to take care of most chores in the house.

The American Academy of Neurology study found that, when you lose sleep, you can't focus, are quicker to get sick, become moodier, and experience a lower quality of life. And the effects of sleep deprivation no doubt have an impact on productivity. For working moms, losing sleep means your brain's not sharp, which means you're more prone to make mistakes, forget to complete tasks, and feel far more stressed, according to LearnVest.

Moms with jobs already have a lot working against them. As Psychology Today reported, working moms experience job discrimination just for having children. They're passed over for promotions, receive fewer job responsibilities, are denied raises, and generally make less than fathers and women without children. So being sleep-deprived only serves to make working and holding on to a job even harder for mothers already struggling to be taken seriously in the workforce.

There are two simple solutions for this, though. Fathers need to step up and take care of more chores, and employers need to stop treating mothers differently for choosing to having children.