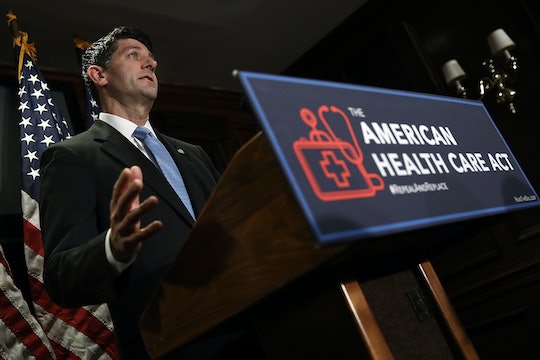 As House Republicans scrambled to pass their proposed replacement to the Affordable Care Act, details of how their health care bill would impact coverage for millions of people continued to come to light. And none of it sounds encouraging. Instead of the “terrific” coverage that would “cover everybody,” as President Donald Trump promised in multiple appearances and speeches made during his campaign, the GOP bill seems crafted to leave fewer people with affordable health coverage and snatch critical services away from thousands of the most vulnerable — including children and adults with disabilities. Among the stingier aspects of the GOP plan is a little-discussed provision that would gut resources available to schools for meeting the needs of differently abled kids. The way the new healthcare bill targets children with disabilities is simply cruel.

The Republican-backed bill has serious implications for the disabled community as a whole, because of an $880 million cut to Medicaid over 10 years and an imposed cap on how much funding states make available to certain groups, like children and the elderly. That would put the home-based and community-based services that millions of children and adults with disabilities were entitled to through Obamacare under direct threat, according to a Vox report.

A New York Times analysis pointed out how the Medicaid cuts would slash resources for children with disabilities, in particular. According to that report, school districts receive around $4 billion in Medicaid reimbursements each year — funds that go toward the services and equipment that children with disabilities require in the classroom, including the salaries of health care and education professionals that help differently-abled children thrive. In a letter sent to House lawmakers this week, the School Superintendent’s Association argued that the bill would cut services to students and lead to districts having to compete with hospitals and clinics for a dwindling pool of Medicaid funds. In addition, the budget cut would have an immediate effect on access to preventive screenings for children, including the vision and hearing tests that often flag potential challenges for school-aged kids.

Families with children with serious health concerns who aren’t covered under Medicaid still wouldn’t be immune to the plans uglier provisions. A new amendment to the GOP-backed bill would mean that states could push families of many children with disabilities into high-risk pools of insurance applicants — and insurers could legally charge those families much higher premiums because of their child’s pre-existing condition. And the list of health challenges that could lead to paying higher premiums includes multiple sclerosis, congestive heart failure, epilepsy, diabetes, and even asthma.

Perhaps the scariest part of the Republican bill is that the full consequences of enacting it are still unclear, as lawmakers seem determined to side-step much of the scoring, analysis, and constituent feedback that is part of the normal process for assessing the cost and impact of major policy. The independent Congressional Budget Office hasn’t scored the GOP healthcare bill since it was updated with amendments designed to win over warring factions of the GOP. Instead, House Republicans seem hell-bent on passing the bill with as little scrutiny as possible. And the result would mean that families of children with disabilities will learn exactly how little coverage they have when it’s far too late to speak out about it.