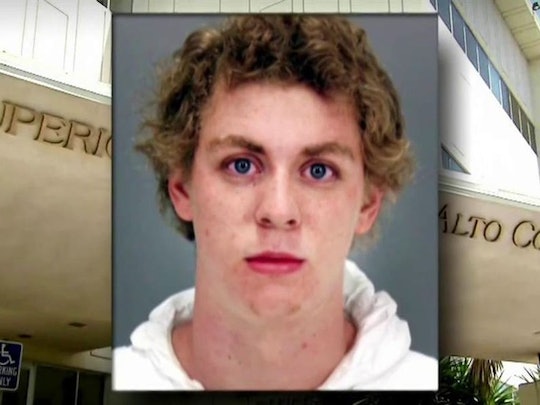 I have, like pretty much everyone else, spent the last few days reading about, hearing about, and thinking about Brock Turner, the 20-year-old convicted rapist from Stanford University. I held back tears reading the incredibly eloquent, brave statement from the Stanford rape survivor about how he raped her as she was unconscious behind a dumpster. I shook my head in disbelief as I read that the judge decided, despite three clear guilty convictions, that Turner should only be sentenced to six months in county jail.

My stomach turned as I read that awful letter from Turner's father discussing his son's "20 minutes of action," and later Turner's own statement about the dangers of alcohol and college "party culture," as though those two things together meant he was somehow a victim too, unable to stop himself from brutally raping a woman who was barely even conscious. I don't know what it's like to be one of the one in five U.S. women who are sexually assaulted, and I don't know what it's like to be raped at a frat party by a drunk stranger, or coerced into sex by someone I knew. But I am a woman, and I am a mother. And one thing I know for sure is that, as I'm trying to raise my children in a world full of Brock Turners, the courage of the Stanford rape survivor, given the fake name of "Emily Doe," will absolutely inform what I will teach my daughter about rape as she grows up.

As a feminist, I'd like to be able to tell my daughter that she can do anything, that she should never let anyone put limitations on her or tell her what kind of person she can be because she happens to have a vagina. I want to tell her that generations of women have worked tirelessly before both of us to ensure that we have better, more equitable lives than they did, and that will certainly be true. I want her to know about the patriarchy, about the inherent privilege of white dudes (which no doubt she will see for herself having a twin brother, though I want to teach him all of these things, too), and I want her to know that rape culture absolutely exists, even if there are plenty of people out there arguing that it doesn't. I will tell her that instead of teaching girls how to not get raped, we need to teach boys not to rape, and I plan on raising my son to know he is never entitled to a woman's body, no matter how drunk she is, or how short her skirt.

But I will also tell her that she will still have to try not to get raped, no matter how unfair and stomach-churning that is.

While it might not be something I discuss with other women at mommy groups or on play dates, when you're a mom of a little girl, you know that, inevitably, you'll have to pass on these messages. We all will.

As much as I wish it weren't true, the fact Madeleine presents as female means that she is going to be vulnerable to people like Brock Turner, just as her mother, and all women everywhere, are vulnerable to men who ever feel like sex is owed to them. And that means that she's going to have to do things she shouldn't have to do, like avoid walking home alone at night, not getting too drunk at parties, never leaving her drink unattended. She'll have to get into the habit of calling someone to let them know she got home safe, of holding her keys between her fingers as a weapon while she walks to her car, of avoiding being "too flirty" on a first date or being "dressed too provocatively," lest he think she's "leading him on."

I don't want to teach her those things, but I will, to keep her safe. And even though I hate to admit it, I know my experience won't be unique. While it might not be something I discuss with other women at mommy groups or on play dates, when you're a mom of a little girl, you know that, inevitably, you'll have to pass on these messages. We all will.

More than anything, I need her to understand that even if it feels like there's no one out there who will support her, that if all the people around her seem to be doing is questioning what she did to provoke him, that she will know without a doubt I will always stand beside her.

But what I need her to learn from this case — what the case taught me so clearly as her mother — is that if she does walk home alone or leave her drink unattended, or get totally shattered at a college party and someone like Brock Turner comes along, it won’t be her fault. It won't be her fault, just like it wasn't the fault of the woman Brock Turner raped who ended up in a hospital with pine needles in her hair and her vagina. I need her to understand, that just like that brave woman, she does not even have to entertain the idea that what a guy like Brock Turner did was anything less than horrific, and entirely of his selfish, entitled doing, even if he (and seemingly everyone around him) denies it.

I need my daughter to know that if she is raped and the system lets her down, if a judge cares more about her rapist's future than about hers, that she still deserves to find her own voice and speak out, just like Emily Doe did, if that’s what she wants. And more than anything, I need her to understand that even if it feels like there's no one out there who will support her, that if all the people around her seem to be doing is questioning what she did to provoke him, that she will know without a doubt I will always stand beside her. And that there are actually a lot of us out there who will be, just like we stand with Emily Doe now.

Having to raise my daughter knowing full well that I may not be able to protect her from rapists, because we still live in a world where the majority of rapes aren't even reported, let alone tried, breaks my whole heart. But if nothing else, I can at least let her know she won't ever be alone to carry that pain, if she ever has to carry it. And, come to think of it, I really hope Emily Doe knows that, too.