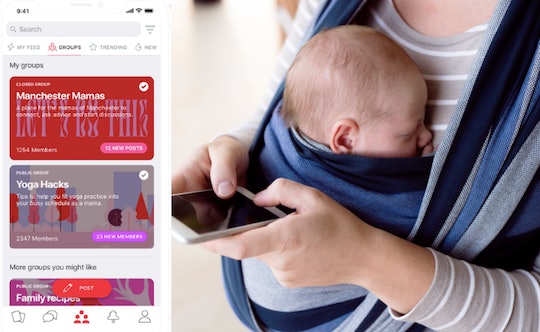 How This App Is Connecting Moms With The Support They Need

After the pregnancy announcement and the baby shower, something happens to new moms. You might be fighting to fold up your new stroller when it occurs to you: Being a mom is not like what you thought. Many of us would take this angst and file it away, but not Michelle Kennedy. Kennedy — a mom in London feeling out of sorts with her infant son Finlay — happened to be Deputy CEO of dating app Badoo, so the fledgling parent used her old skills to solve her new problem by creating Peanut, a free app that helps connect moms with the support they need.

After Kennedy had her son, the former tech wiz hardly recognized herself, as she tells Romper in an interview. Combing through existing blogs for baby advice at 2 a.m., she realized she'd hit a roadblock. Her friends weren't having kids and she was lonely, she explains.

"To find yourself at home in the afternoon while your girlfriends are at the office, and this tiny person is [still] doing, like, nothing… to all of a sudden be in the job of mom, it felt like I wasn't coping," Kennedy, now 36, recalls of those early days.

She continues, "There are women who seem to have it so very together [as new moms], they felt like this was their mission... then you have women who seem to be very efficient. I felt somewhere between a hot mess and an imposter and I didn’t know who to talk to about it."

Luckily, not only had Kennedy worked at Badoo, she had been involved in the gestation of Bumble, according to Forbes. The popular dating app lets women do the choosing and swipe, Tinder style, and Kennedy wondered why anything that user-friendly didn't exist for moms, who arguably need more support than many groups.

And following the app's success over the years — boasting a userbase of 650,000 users and millions of swipes — it's now expanding its reach even further with Peanut Groups.

Peanut Groups allows users of the app to create and join groups for specific interests or needs. Some groups, according to the company, include LGBTQ women, Late Night Fitness Club, Special Needs Mamas, and local or hyperlocal communities.

"We were getting a lot of requests from women for, say, [a forum for] LGBQT moms, or fitness moms, or a certain kind of fitness, or threads for crunchy moms," Kennedy says of the app's new feature, which rolled out this week. "It’s not just about meeting new people, but how can [users] have the other conversations [they] can have on other platforms? It's the idea of democratizing [the experience]."

The company said in a press release that Peanut Groups is "a smart update to the outdated forum model" that allows moms to "communicate in a secure, private way."

Kennedy was struck with the fact that the existing models of how parents connected online just didn't quite fit with what many younger moms necessarily needed or were looking for, though she admits "those [traditional online chat] groups damn near saved my life in the beginning."

But Kennedy tells Romper creating something specifically for women was important to her. "We want to address women, [we want] users to be able to ask questions about their sex lives, their work lives, their relationships, and feel it's a safe environment for them and not feel like there's an ad about the holiday destination they were just discussing following them around," she says. "The platform is private and personal to them."

Peanut is available in the U.S., Canada, and the U.K., and stateside, the app's largest communities are based in New York, Los Angeles, San Francisco, Chicago, and Dallas, according to Digital Trends, and Kennedy mentions a fast-growing following in Florida.

Motherhood is tough and can be isolating at times, and giving moms a platform to vent, express themselves, and just feel supported seems to be the inspiration behind Kennedy's app.

"I think there is tremendous pressure on us," Kennedy says. “We have to be a boss, but the most amazing mommy who makes handmade birthday invitations... If It’s Fin’s birthday, I am going to throw money at the situation and buy the invitations. I can't sit and craft, it's not who I am, vs. the mom who absolutely gets her tranquility from crafting."

She continued, "Peanut is about giving you permission to be you. Why are [moms] pretending to be perfect all the time? [As a society], we have to keep talking about it so we can make changes."

It wasn't professional to tell Kennedy to keep preaching, but let's just say I was nodding my head faster than I could take notes. Peanut has already made an impact on a growing number of moms, and with this new expansion, the social network will keep connecting moms with the support they need.