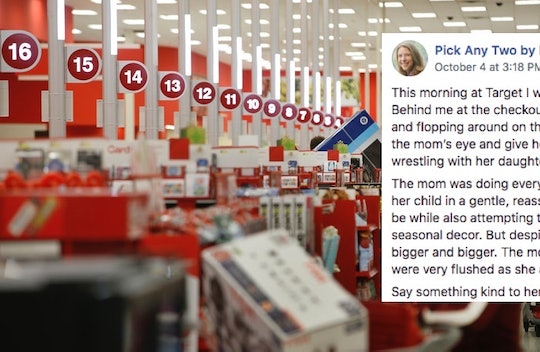 I doubt there are too many parents out there who haven't had to suffer through a public tantrum. I have several that stand out in my memory and they all share a few common elements; feeling helpless, frightened, out-of-control. Feeling as though everyone is watching me and judging me, my face red with mortification. Feeling alone. That might be the worst part, actually, that feeling of being totally isolated from other grown-ups, which is why I was so overjoyed to read about how this woman supported a mom dealing with a toddler tantrum at Target. Because this needs to become a regular thing, moms who have been there stepping in to help out moms who are in it.

Blogger and mom of two Katie McLaughlin found herself at the check-out aisle of her local Target recently. She was in line in front of a fellow mom who was in the grips of an "epic tantrum" as the poor woman was just trying to buy her goods and get out of there, as McLaughlin shared on Facebook. McLaughlin wrote in the viral post that she "tried to catch the mom’s eye and give her an empathetic look, but she was too busy wrestling with her daughter to notice me."

This is always a tough situation to be in; as a mom who is trying to empathize and a mom who is trying to get her kid out of there. McLaughlin wrote that this mom was doing her best to stay calm, but the maelstrom of a toddler tantrum was not to be avoided. Still, she wanted to say something to help her out.

After an internal debate, McLaughlin walked out of Target and saw this struggling mom trying to get her daughter in her car seat. And decided to reach out, as she wrote on Facebook:

"Sorry to bother you, but I just wanted to say you’re doing a great job." She looked up at me, blinked twice, and then visibly melted. Tears started streaming. "I think I feel as bad as she does." I nodded. "I know it doesn’t feel like it now, but you are rocking this." More tears. "You have no idea how much I needed to hear that."

I guarantee that every mom who has dealt with a tantrum knows how much she needed to hear that. Which could be why McLaughlin's post has been shared more than 14,000 times and has garnered more than 36,000 reactions on Facebook. With any luck, this could even start a new trend; supporting parents who are having a tough time.

As McLaughlin wrote: "Empathy instead of judgment. Support instead of silence. Community instead of isolation. This is the parenting revolution."

In an email to Romper, McLaughlin explained that she has been amazed by the overwhelmingly positive response to her post. "I've been blown away by the response to the post," she tells Romper. "I feel for each and every mom who's shared her own experience with public meltdowns."

She continued, "We have all been there! We've all felt that embarrassment! But when we talk openly about it and support each other, it's easier to put it in perspective."

As for the idea that simply reaching out and supporting other parents when they're struggling, McLaughlin tells Romper that this experience has taught her to trust her instincts:

The next time I see a mom in public struggling, I won't hesitate to reach out to her — whether through an encouraging word, an empathetic glance, or a more direct offer to help in some way. The worst that can happen is that she'll say no, but the chances are much higher that she'll appreciate the support.

Raising kids can feel surprisingly lonely, especially when things don't feel like they're going well. I can think of so many times when I wanted to help out another mom but didn't want to embarrass her. But moving forward, I think I'll follow Katie McLaughlin's lead.

Because everyone wants to feel seen, you know?