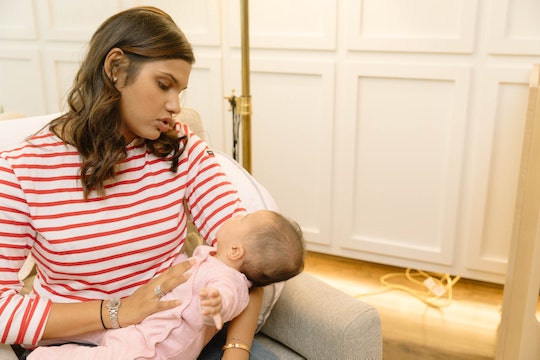 How To Adjust Your Baby's Sleep Schedule After The Time Change, According To Real Moms

In theory, setting the clocks backwards an hour seems like a great idea. Seriously, who doesn't want an extra hour to laze about and sip coffee in bed while watching Meet the Press? Parents, that's who. You see, little bodies don't understand the meaning of a time change and they make their grievances known a full hour before you're ready to hear them. Thankfully, there are ways to help your child cope with the shift. Knowing how to adjust your baby's sleep schedule after the time change means you can both get some rest.

Daylight Saving Time (DST) was originally designed to align the daylight hours with social time so that energy would be saved by people having access to more naturally lit hours, according to Time. However, since our bodies run on their own clocks, and not by the ones lit with an LED display, the switch can have a negative effect on circadian rhythms. This is especially true with babies, who if left to their own devices would maintain their schedule. Since that's usually not feasible with working parents, parents must attempt to slowly adjust their baby's sleep/wake cycle to align with DST. The time honored method for doing this is putting your baby to sleep 15 minutes later each night for four nights in the fall and doing the opposite in the spring.

Either way, there's going to be some pissed off parents and cranky kids for at least a few days until everyone can get some sleep.

As it turns out, DST is more of a nuisance than it appears on the surface. A recent study published in the medical journal Biology argued that our bodies, especially those of us who identify as night owls, never truly adjust to DST. That means, if you're naturally given to waking late, or if you have a toddler or child who tends to rise later, they spend the six months during DST fighting their own circadian rhythm. Thankfully, there's real movement to eliminate the practice, having it go the way of the dodo, and my obsession with N'SYNC.

Common practice, per the experts at the Baby Sleep Site, is to gradually adjust your children by putting them down a little later each night until they're settled into the new time. This works for many parents, myself included if I'm working only with my son, but it's not the best advice for those of us who have tiny early birds.

You see, my daughter has risen with the sun or before the sun since she was born. It's a rare day that she wakes after 6:30 a.m. I mean, there's just so much stuff to do, right? Falling back means she wakes when I do, and that means I don't get coffee before she's bounding into my room demanding attention. It's not good for anyone involved. I asked some mom friends of mine to share their tips for getting their kids into a new pattern, and they've got some great advice — none of which is "pretend your child doesn't exist until 6 o'clock."

Megan Adams, 35, tells Romper, "I make sure they have the blackest of blackout curtains hanging in their room. That way, I can start opening them a little later each day until we even out." No lie, I have super black curtains in my daughter's room, and she somehow manages to get them cracked at night. Devious little thing.

J'milah Cole, 29, has an ingenious tip for new moms that I've never heard before. "I use the dimmer switch on their room light and gradually bring it up for the first few days until they adjust," she tells Romper. "It seems to be less jarring than what my mom did, which was just to throw open the curtains and ask me which cereal I want." Admittedly, this is not far from what I do. I just give in and move on and wait until they adjust themselves.

Looking for a more neutral approach? "I work on it for a week or so after DST is over by putting them to bed a little later each night," Monica Pope, 33, tells Romper. "I ply them with snacks and stories and they don't even notice."

JT Luntgren, 37, goes for shock and awe with her kids. "I keep them up really late the night before. I'm brutal about it," she tells Romper. "But hey, I like my sleep, and I really need time to myself in the mornings to regroup. My kids are 5 and 8, so they can handle the shock to the system for a night." I am so trying this. (I mean my husband will be, mama needs her rest.)

No matter how you cope, it's not the world's most fun week, but it's doable, and hopefully, those in charge will get rid of this DST nonsense soon.