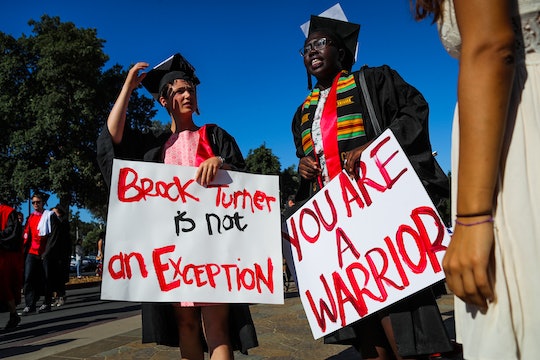 How To Argue Against The Brock Turner Rape Case

As soon as the Stanford rape victim's letter to her rapist, Brock Turner, went viral, it seemed like everyone was outraged. The case and his sentence, a mere six months in a county jail with some probation tacked on, seemed like such a blatant "f--- you" to women, and their supporters, everywhere. And although in most circles the name "Brock Turner" evokes anger and sadness from those who understand the intricacies of rape culture, you might find yourself asking how to argue against the Brock Turner rape case to lesser informed people.

And you should argue against the verdict and his sympathizers at every chance you get. Be that person. It's not hard to explain to some people what rape culture is or why, exactly, Turner's sentencing and his defense strategy all along the way is so infuriating.

Recently, a friend of Turner's summed up some of the thinking on the other side about this. Leslie Rasmussen wrote a letter to the judge regarding Turner's then-impending sentencing, claiming that, "I don't think it's fair to base the fate of the next ten + years of his life on the decision of a girl who doesn't remember anything but the amount she drank to press charges against him."

She added, "I am not blaming her directly for this, because that isn't right. But where do we draw the line and ... see that rape on campuses isn't always because people are rapists." Yea, she went there. Although she did walk her statement back a little after being ripped apart on social media for her point of view, her initial response is everything that women have to fight against.

Aside from avoiding that same pitfall, here are three things to think about if you find yourself faced with a situation where you need to defend your position from someone like this.

Remember: It's Not "Complicated"

There are no "levels" of rape and just because there is alcohol involved doesn't immediately make a case, "tricky" to look at. If there was no consent, or someone is drunk enough to not give consent that equals rape. When someone says, "but she was drunk," that's exactly why it's rape. If "she was drunk," she can't consent. That's rape. The end.

All too often one of the first questions in rape cases have to deal with the woman — why was she there, why was she alone, why was she dancing in a short skirt? — instead of asking why a man chose to have sex with her without her consent. Of course, we all must look at the evidence of every crime, but assuming first that a victim is lying or exaggerating or feeling remorse for what you deem a consensual act is completely ridiculous. It's sexist to assume that a woman didn't, or can't make her own decisions about her body or life.

Men Are Not Weak, Either

Likewise, blaming party culture, booze, and tight dresses for rape is also offensive to most men. It's insulting to everyone. Most men can handle talking to a woman without thinking about what she looks like underneath. Most men will walk a woman home or give them their hoodie if she's cold. Most men don't rape. Implying that the party was stronger than the man is just not logical. They are not robots or animals. Shout out to all our homies who recognize we're all equals (and human).

Overall, the only way to take on rape culture is to talk about it every chance you get. It's not an easy fight, since some of these things — sexism, mainly — are so ingrained into our culture and legal system that we've come to think of them as true. If love is love, rape is rape. It's time to start saying that over and over again until we raise people who know that, instinctively.