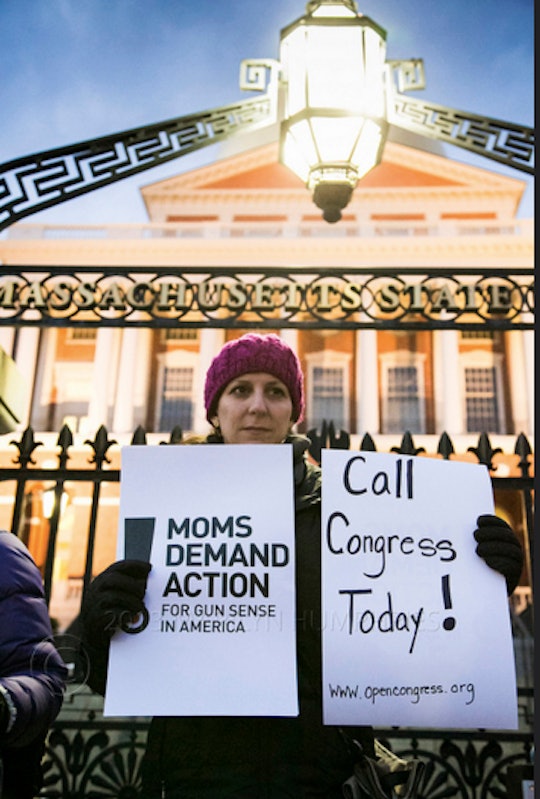 How To Ask Your Congressperson For Gun Control, Because It Seems Like A Good Time

Following the horrific events that unfolded on Wednesday when a shooting in San Bernardino left at least 14 people dead and upwards of 21 more injured — which makes mass shooting number 352 in the U.S. just in 2015 — you might be wondering how to ask your congressperson to ask for gun control. After all, you can only send out so many heartbroken, angry, frustrated tweets in the wake of mass shootings before you start to wonder why events like these are even able to still happen — and what you can do to help ensure that they're less likely to happen in the future.

Everyone from President Obama to leaders of foreign countries is puzzled as to why America does not have stricter firearms laws. So, what can you do about it? You can obviously share thoughts on social media, which is a powerful way to connect with others while processing trauma, but it doesn't feel like it yields any real results, other than maybe feeling better after expressing your feelings. So what can you do? You can also go to congress and demand stricter regulation of firearms, because that's how this country works.

The fact is, it's your right as an American to make sure your government is hearing what you want and then doing something about it. Remember: these are our elected officials, and the more you speak up, the more they have to listen. So here's what you need to know about contacting your congressperson about your thoughts on gun control.

Need some positive inspiration to reach out to your congressperson? In 2014, citizens began to step up to affect changes in gun control laws. In Washington, voters passed a ballot initiative that required background checks for all firearms, making Washington the 9th state, plus the District of Columbia, to require background checks on private sales of guns. Massachusetts passed a comprehensive bill enacting specific gun laws in the purview of domestic violence, and insisting on background checks, and licensing of gun owners. Way to go citizens! OK, so if you want to join the crusade and prove the pen is mightier than the sword, here are a couple things to keep in mind before you write that letter (email) to your congressperson.

What Is Gun Control?

Broadly, gun control is the restriction of firearms. Namely, who can buy and sell guns; how guns can be carried, concealed, and stored; what measures gun sellers have to take (including background checks to vet potential gun owners); what obligations both the gun seller and the gun buyer have to report to the government; what types of guns and magazines are considered legal; the legality of technology allowing only the registered gun user to fire the weapon. Gun lock restrictions and "smart gun" laws are the most recent additions to the discussion on gun control.

Does Gun Control Exist On A State Level?

Yes. Most firearm regulation exists on a state level. You must contact your state representative in order to affect change. According to The Law Center to Prevent Gun Violence, an organization that advocates for firearm restriction by, among other things, grading states on gun control laws,"the states with stronger gun regulation have lower gun death rates, and the states with weaker regulation have higher gun death rates."

How To Ask Your Congressperson For Gun Control

The first step is to find out who your congressional representative is. According to the government's website on reaching congressional representatives, "If you know who your representative is but you are unable to contact them using their contact form, the Clerk of the House maintains addresses and phone numbers of all House members and Committees, or you may call (202)225-3121 for the U.S. House switchboard operator. In addition, you may choose to visit your member's website directly for further information."

How To Address Your Congressperson

"The Honorable" and "Representative" is the correct way to address your congressperson.

Why The National Rifle Association Defends The Right To Bear Arms

After so many mass shootings in recent years, in addition to the staggering statistic pointed out by Washington Post journalist Christopher Ingraham, that people are getting shot by toddlers on a weekly basis in 2015, (yep, you read that right: toddlers are firing weapons when they have access to them, and with deadly results) the NRA has not backed down in its opposition to gun restriction. The NRA's answer to America's gun violence problem is to arm more people. As head of the NRA infamously said after the Newton school shooting, "The only thing that stops a bad guy with a gun is a good guy with a gun." The argument here might seem not only ridiculous, but deadly, but these guys know how to lobby. So, if you don't like the message they're sending, make sure to let your voice be heard.