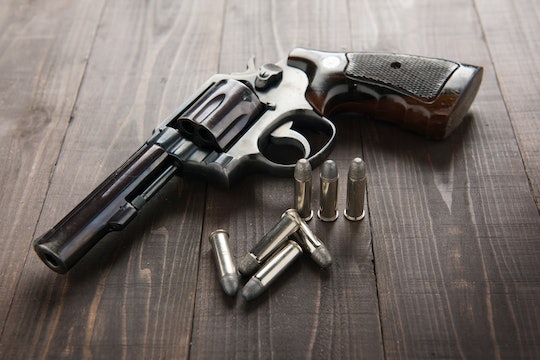 What Are California's Gun Laws? The East Cost State Has Some Strict Policies

Earlier: On Wednesday afternoon, police responded to reports of a mass shooting in San Bernardino, California. The reports came in around 2:15 p.m., with the San Bernardino Sheriff's Department confirming the incident on Twitter shortly after. Two of the three shooters are dead, one of whom was a woman, and the victim count is up to 14 people. In light of the shooting, many are wondering what are California's gun laws and policies?

And, it's a fair question. The events in San Bernardino are the 25th mass shooting in California this year, making many wonder if the Golden State's laws on handguns and firearms are too lax. But, as it turns out, California has some of the strictest gun laws in the United States. According to the California Department of Justice's 2013 California Firearms Law Summary, "only licensed California firearms dealers who possess a valid Certificate of Eligibility are authorized to engage in retail sales of firearms." The summary continues to say that sale is followed by a mandatory 10-day waiting period, in which the DOJ conducts a full background check to "ensure the purchaser is not prohibited from lawfully possessing firearms." And the list prohibitions is not short. Any person convicted of a felony or offense, to who has been adjudicated to be a mentally disordered sex offender has a lifetime prohibition. The state also has laws in affect to prohibit people from purchasing a firearms 10 and five years following a conviction.

Furthermore, the summary emphasizes that in order to purchase a firearm, the purchaser must provide proof of California residency and a valid Handgun Safety Certificate, as well as successfully perform a safe handling demonstration. Following the sale, purchasers are not allowed to purchase another firearm for 30 days.

And, as the LA Times reported, California legislation implemented three more gun laws in 2015 — including one about toy weapons. The first being that, California courts must report to the state Department of Justice within one business day when a person becomes barred from having a firearm. The second, which pertains to gun law standards, noted that single-shot pistols must comply with all of the state's handgun safety requirements. Finally, in regards to toy weapons, the state ruled that manufacturers now must make the toys brightly colored so officers can easily distinguish them from real firearms.

Unfortunately, despite even the strictest rules, people are able to find a way to purchase weapons even when the laws prevent them from doing so. The events in San Bernardino should serve as reminder that we must continue to do more to stop mass shootings from occurring.