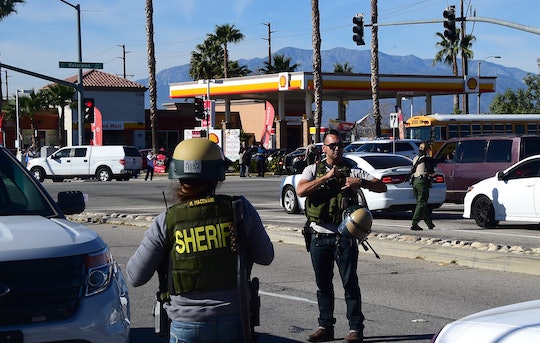 One San Bernardino Shooter Was Female, According To Authorities

Update: Late Wednesday night San Bernardino Police Chief Jarrod Burguan identified the female suspect as Tashfeen Malik. Burguan described Malik as being in a relationship with the other suspect identified Wednesday, Syed Farook. According to Burguan, both were killed in the SUV chase and confrontation with police after they opened fire at a holiday party the Inland Regional Center earlier in the day.

Earlier: Authorities stated in a press conference Wednesday evening that one of the suspects in the San Bernardino shooting is female. According to police, she and a male suspect were killed in a confrontation with police following the shooting attack on the Inland Regional Center earlier Wednesday. A third person was detained near where police confronted the suspects, but the extent of that person's involvement wasn't known at the time of the press conference. The suspects killed were not identified, and the relationship between them was unknown.

According to officials, the two suspects killed were "dressed in assault-style clothing" according to authorities and both armed with assault rifles and handguns. There was also "sensitive stuff around the vehicle" according to San Bernardino Police Chief Jarron Burguan that law enforcement was dealing with cautiously.

The vast majority of mass shooters are male. Historically, most female mass killers have use other means, including vehicular homicide and arson, to perpetrate mass crimes. One exception occurred on Jan. 30, 2006 former postal processing plant worker Jennifer San Marco entered the plant and killed seven people, then herself.