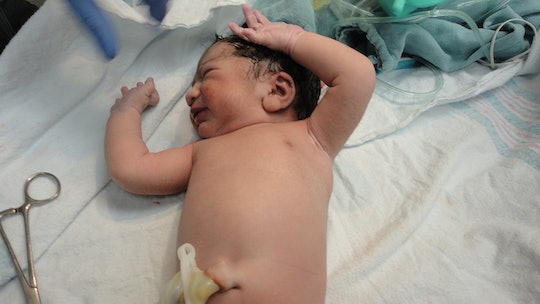 It's the last tether that attaches your baby to your body after pregnancy — the umbilical cord. And for many parents, cutting it is a symbolic act that brings your child to this part of their life. So much so that many parents want to do it themselves. But with so much information out there showing that it may be beneficial to delay the big milestone, many moms are wondering how to approach this with their healthcare provider. Knowing how to ask your doctor about waiting to cut your baby's umbilical cord is not only important, but empowering.

Recent studies have shown that it is beneficial to infants, especially preemies, to delay the clamping of the umbilical cord, or even to milk the umbilical cord, allowing precious nutrition to reach the baby at birth. According to a study out of New Delhi, preemies who were allowed to remain unclamped for a period of time after delivery reported significantly higher hematocrit, and were less likely to require oxygen after birth.

I contacted OB-GYN Dr. Wayne Furr of Lone Tree Obstetrics and Gynecology in Lone Tree, Colorado, and asked him about how to talk through this decision with your doctor. Luckily, it's not as big of a deal as you may think.

"Generally speaking, most obstetricians and providers have recognized that delayed cord clamping is beneficial to your newborn baby," Furr says. "Also, it is entirely within your right to request delayed cord cutting. Seek to have a thorough discussion with your obstetrician regarding your wishes in this as well as his/her opinions on this practice. There is plenty of evidence that delayed cord cutting actually helps the baby, boosting the baby's blood volume to combat anemia, and increasing the baby's iron levels. Additionally, there is evidence that delayed cord clamping assists babies even later in life." Furr notes that providers and OBs used to be reticent to delay cord clamping, "believing that the newborn might actually have a net loss in blood if performed." But thanks to science and studies, this isn't the general opinion anymore.

Furr went on to say, "There are times, however, when delayed cord clamping cannot be performed. If the cord is wound tightly around the neck and cannot be unwrapped (called reduced), then an emergency clamping of the cord needs to be done so as to not risk strangulation of the baby before birth. Additionally, if the baby is in need of urgent post-delivery care by the neonatal nurse or doctor, the baby's cord may have to be clamped earlier so as to allow the team to work with the baby to assure baby's health."

I honestly have no idea when they clamped my son's cord as I was really busy trying not to bleed to death, but with my daughter, I remember my doctor waiting a bit and actually humming a tune to herself as she waited to clamp the cord. I think it was a lullaby, but it would've been so much funnier if it was Nine Inch Nails or Eminem. When her humming ceased, she clamped the cord.

If you are concerned about delaying the cord clamping because you were intending to bank the cord blood, there are a few things you should know. According to cord banking service, CryoCell, in most cases, the ability to bank cord blood isn't affected by delayed cord clamping because the clamp is typically placed about a minute after birth. However, if it goes beyond two minutes, the blood in the cord begins to clot, making it unusable. Make sure your OB-GYN knows before you go into labor that you intend to bank, and that the clamping falls in the delicate and short period between long enough and too long.

When it comes to clamping the cord, go into your appointments armed with knowledge, and calm composure — you'll be good to go.