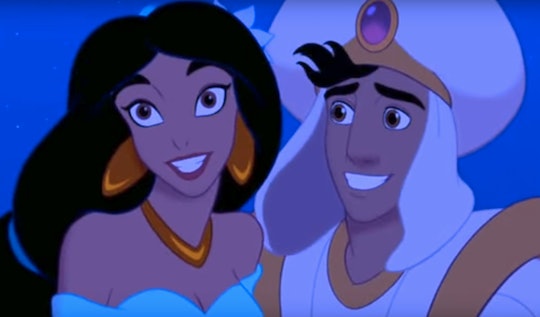 If you're an actor between the ages of 18-25, or just a really beautiful person of Middle Eastern descent who can sing and dance, I have some good news for you. Disney might want you to star in a new movie and thereby change your life forever. If you think you've got what it takes (said in the voice of a demanding talent agent), then check out how to audition for the live-action Aladdin movie. It's going to be "A Whole New World" (don't you dare close your eyes!) of fun.

According to The Hollywood Reporter, the casting call is specifically looking for actors who have strong singing skills, and casting directors consider dancing skills a "plus." (If director Guy Ritchie is planning on staying true to the original plot, the actress who plays Jasmine will have to be super comfortable with pet tigers and Aladdin will need to understand how to speak to monkeys. But I suppose those skills can be taught in a pinch.)

The casting call also noted that filming will take place over six months in the U.K. starting January 2018. No word yet on who will fill Robin Williams' mighty Genie shoes; The iconic actor who voiced the blue genie from the lamp in the original 1992 animated feature died in 2014.

To audition for the movie, you simply have to email a video of yourself singing and send a still photo to ctcastingoffice@gmail.com. Auditions start in April, so be ready to go out and stun the world. I personally recommend dressing in full costume and singing "A Whole New World" on a magic carpet to catch the casting director's eye, but that's just me. I'm all about commitment.

Disney is all about the live-action remakes these days; Beauty and the Beast starring Harry Potter's Emma Watson is set to be released on March 17, and already looks incredible.

Disney is also planning a live-action version of The Little Mermaid with original songwriter Alan Menken and Hamilton's Lin-Manuel Miranda at the helm. And Disney recently put out a casting call for a live-action adaptation of 1998's Mulan, the legend of a young Chinese girl who disguises herself as a boy to become a warrior and take her father's place in the Chinese Army. The movie will feature an entirely Asian cast (because obviously), and Disney has set a global casting call to find a Chinese girl to play the title role for the movie to be released in winter 2018.

So best of luck to all you budding actors out there. And kudos to Disney for actually choosing to go with Middle Eastern actors to play Middle Eastern roles. It really is "A Whole New World" (every moment gets better!).