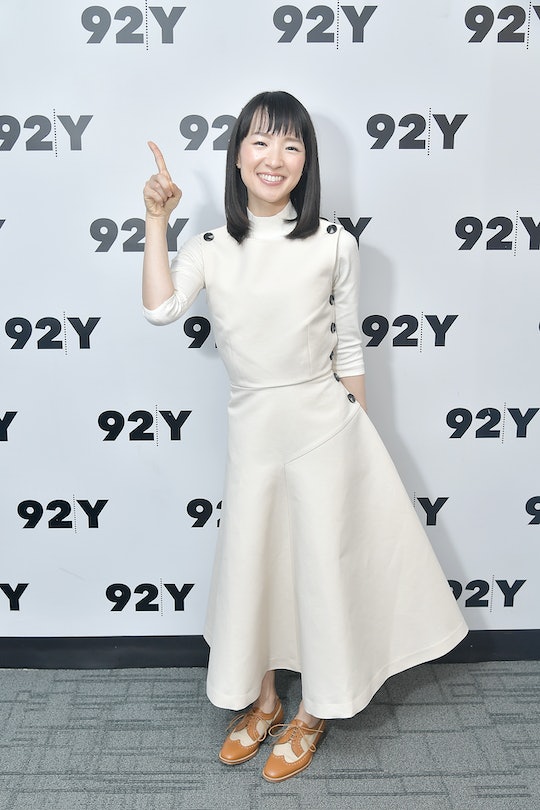 Marie Kondo and her magical method of tidying up have earned millions of fans all over the world, thanks to her wildly popular books and her hit Netflix show. In fact, some of her biggest fans are now following in her footsteps, and sparking joy for a living. But even if Kondo has a small army of proteges at this point, becoming a KonMari consultant is no easy feat.

Kondo's company takes consultant training very seriously, and the KonMari website lays out the seven step process so aspiring organizational gurus know what they're getting into. It starts with reading Kondo's two best-selling books, of course, but then there's a training seminar, practice "tidying lessons" with clients, and even a written test. In an interview with Romper, Boston-based consultant Phoebe Cusack says it was intense: "It took me just over a year to complete my certification process."

Karin Socci, a New York City-based consultant, took part in the very first training session in the U.S. in 2016 and learned from the master herself. "Marie taught a lot of the classes in the very beginning," Socci tells Romper. It's now a full time job for Socci, who left her career in the healthcare finance field so she could get her certification faster. "The training was in August and I reached the first level of certification in early January."

The training session doesn't come cheap, as Money reported. A spokesperson for the company told me there are two sessions scheduled for this year; one being held in March in New York City costs $2200, while the London option in April costs $2400. Students attend lectures, participate in group discussions, and receive training on how to handle and support clients without judgment.

After that, a consultant needs to log at least 30 practice hours in at least two clients' homes. A consultant in training can charge for those practice tidying lessons, or they can choose to do them for free with family and friends. Either way, Socci says they're an important step in the process because they show consultants the not-so-glamorous parts of the job. "You really see, ‘Yeah, I’m going to be digging through closets, and pulling stuff out from under beds, and sometimes people who have not been organized have not been able to keep things as clean as they would be in my house.’ Sometimes there are pets, sometimes there are years of accumulation," she says. "It's really hard work."

Those practice lessons are then critiqued, says Cusack. "We had to submit written information for each lesson talking about the client’s goals overall, and for that specific lesson. And we had to talk about what we did in the lesson to help them meet those goals, reflect on things we thought we could have done better, what places you wanted to improve, and something that really went well." All that info is then logged into an online portal for the consultants, where someone from Kondo's company reads it over and sends feedback.

You also can't become a consultant until you prove that you practice what you'll be preaching. "You have to show that you have done KonMari in your own home," says Socci. And it's not an honor system, according to Cusack. "I had to send in photos of my closet and my home. I would send in the photos and get an email back that was like, ‘Thank you so much, your photos look wonderful. There’s a closet in that second bedroom, can we have a photo?’"

When all that's done, there's a final exam. Cusack says it was very in-depth. "A lot of the test was, ‘What would you say to a client who said this?’ or ‘What would you recommend for a client who has this issue?’ I had to resubmit questions I think twice, because they were like, ‘Tell us more.’"

Once you make it all through all those steps, you're ready to officially obtain certification as a KonMari consultant. There's a contract you need to sign and a $500 annual fee, but other than that, consultants can pretty much be their own boss. And this career is a potentially very lucrative one, according to House Beautiful; KonMari consultant rates start at $100 per hour, with more in-demand consultants commanding higher fees. Socci says the KonMari company isn't particularly controlling of consultants, something she appreciates. "We all are independent business people and the company has done a really good job as far as being hands off. They make suggestions but they don’t say, ‘You must run your business like this.’"

Discovering the magic of tidying up, and then making a career out of it, has certainly sparked joy for both Socci and Cusack. Spreading that joy to their clients is a duty they both take seriously, but it seems they could have a lot more competition very soon — Socci says this year's consultant training sessions already have hundreds of people on their waiting lists.