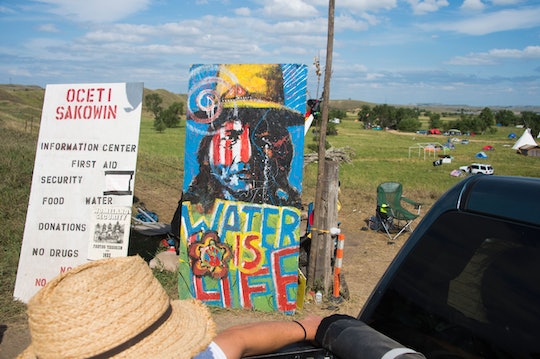 Tell The White House You're Not OK With The DAPL

And the hits keep on coming. News broke this week that construction of the Dakota Access Pipeline might continue under the administration of President Donald Trump. As a result of a statement made Monday by Sean Spicer, Trump's press secretary, many concerned citizens are wondering how to call Trump's administration about the Dakota Access Pipeline, because Native lands are in danger.

In his statement to the press, Spicer implied that Trump's administration would find a way to bypass the permit denial that currently prohibits construction from continuing on the 1,172-mile pipeline. Without specifically mentioning the permit or other possible avenues to continuing construction, Spicer said, "I will tell you that areas like the Dakota and Keystone pipeline are areas that we can increase jobs, increase economic growth, and tap into America's energy supply. That's something that he's [Trump's] been very clear about."

In early December, the U.S. Army Corps of Engineers denied an easement permit to Energy Transfer Partners, which would be necessary for the Dallas-based company to continue its construction at a location under the Missouri River that would endanger the water supply of the Standing Rock Sioux reservation. An easement permit, if obtained, would essentially allow the company to evade compliance with the Clean Water Act.

Since it's currently unclear how, exactly, Trump's administration will move forward with supporting the pipeline, concerned citizens can begin at the top by calling the White House at 202-456-1111. The White House can be reached by email at whitehouse.gov/contact. It might also be useful to contact the Environmental Protection Agency (EPA), which oversees implementation of the Clean Water Act. Another relevant organization is the U.S. Army Corp of Engineers, which is responsible for issuing easement permits.

Ultimately, the fate of the Dakota Access Pipeline might rest with Congress, not the EPA or the Army Corps. According to a Mother Jones interview with Deborah Sivas, a professor of environmental law at Stanford University, Congress could enact an appropriations rider that would allow the pipeline to move forward without an easement permit. "Trump could sign off on it in week one," Sivas said. "All it takes is one sentence." According to Sivas, it would also be possible for Trump's administration to pressure the Army Corps to reverse its decision.

Trump's support of the pipeline doesn't come as a surprise. Back in December, Jason Miller, a spokesperson for Trump's transition team, said, "with regard to the Dakota Access Pipeline, that's something that we support construction of." Financial disclosures released during Trump's candidacy revealed that the president owns stock in Energy Transfer Partners, the company that's building the pipeline, and also in Phillips 66, an energy company with a large share in the Dakota Pipeline.

Back in November, an article at Fortune observed that "while Trump's stake in the pipeline company is modest compared with his other assets, ethics experts say it's among dozens of potential conflicts that could be resolved by placing his investments in a blind trust, a step Trump has resisted." In early January, it was revealed that Trump will not place his assets in a blind trust.

We don't know when, precisely, Trump's administration will make a decisive move. Until then, it's up to citizens to contact the relevant organizations and voice their opposition to the pipeline.