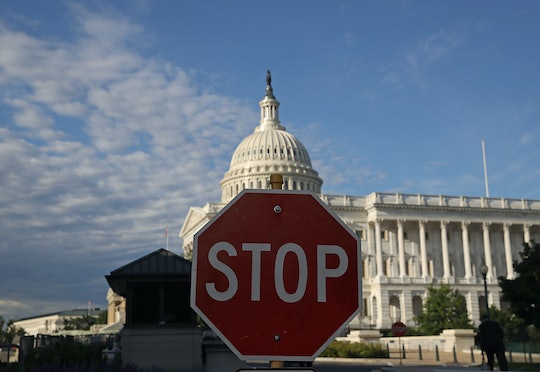 How To Call Your Senator About The BCRA

This week, Senate Majority Leader Mitch McConnell announced that the Senate would be pushing its vote for the Republican health care bill, the Better Care Reconciliation Act (BCRA), until after the Fourth of July holiday recess. Originally, the Senate had hoped to vote on the bill quickly, before every senator headed off to their hometown for the holiday. The delay is good news for anyone who was nervous that the health care bill would be pushed through Congress without too much debate. Basically, it means you have time to call your Senator about the BCRA before they get back to work.

If this is the first time you've called your senator to let your voice be heard, rest easy. It's actually fairly simple to contact them and tell them how you feel about the bill. You can look up your senator on this website and leave a message. You might actually get their voicemail, since it's a holiday weekend. Leave one all the same. Keep it short.

If someone answers, you should just tell them immediately that you're calling about the upcoming BCRA vote and whether you oppose or support it. Keep it simple and quick, so they can log the call for their boss. If you start ranting about other issues, the purpose of the call gets lost and might not be tallied by an office worker or software. Your call will be much more useful if it sticks to your state and your issue.

The BCRA is a budget reconciliation bill, which means that the Senate only needs two Republicans to defect from their party, and they could still pass it. The vote on the bill was delayed this week because up to nine Republican senators said that they weren't going to vote "yes" for the BCRA until some changes were made.

Maine, Wisconsin, Nevada, Louisiana, Kentucky are just a handful of the usually conservative states that have said they wouldn't vote for the bill. With more pressure, other Republican senators could also be turned. If you want to tell your senators how you feel, now is the time. Tensions in the Senate are running high right now in regards to this bill, and with input from voters, there is a real chance at forcing Congress to take a few more passes at a draft that affects the majority of Americans.

Consider that only 17 percent of Americans support the Senate's health care bill. Ensuring that there is a lively debate about the BCRA's finer points and making sure your opinion is reflected in your senators' vote is the most patriotic thing to do over the holiday weekend. (Aside from grilling burgers and catching some fireworks, of course.)

There is a lot of pressure coming from the Republican party and Donald Trump's administration to pass a health care bill that repeals and replaces parts of the Affordable Care Act. But some Republican senators who didn't get to add anything to the bill want more time to do just that. Others are worried about their chances of reelection in 2018, knowing that their constituents care about the millions of people that would lose health care under their watch could sway their vote.

These senators have a tough choice to make: Vote for the bill and tow the party line, or risk losing in 2018 when constituents realize they lost some health care benefits due to this vote. Citizen input in the form of phone calls and messages are a good way to show them that the moral and ethical implications of voting against their constituents' needs is greater than party loyalty right now.

If passed, the BCRA would have to be reconciled with the bill the House of Representatives passed — the American Health Care Act — in May. You can call them, too, since eventually, your representatives will all have to work together to craft health care legislation that ends up on the president's desk.

It's likely that senators and representatives will hold town halls or events during their holiday recess. If you can't call, you can also show up to these events and peacefully protest for either side.

Senators are waiting to hear from you about the BCRA. So whatever your opinion of the bill is, let your voice be heard this weekend. Because once the Senate gets back from vacation, the vote is on.