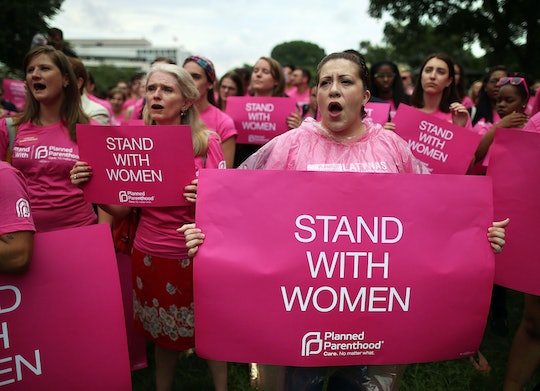 In my world, every day is a great day to wear pink. But Wednesday is an especially good day to wear pink. Because wearing pink on Wednesday is showing support for Planned Parenthood, and with the political climate turned ice cold against the essential women's health care provider, the organization can use all the support people can muster. Want to rally those social media troops behind the important cause? Here's how to change your profile picture to support Planned Parenthood for Pink Out Day and spread the message loud and proud.

If you want to change your profile picture for Pink Out Day, you can log in to the Twibbon app to use the hashtag #IStandWithPP. The app offers easy-to-follow directions on how to turn your profile picture pink, and voila! You are sharing your support of Planned Parenthood with all of your followers, not to mention your support of women's rights to reproductive health care. As the Planned Parenthood website puts it:

Pink Out Day is time for reproductive rights supporters to show their defiance against the relentless attacks on Planned Parenthood. It’s a day to show anti-women’s health politicians that we will fight like hell to protect our 2.5 million patients a year and the 1 in 5 women that will go to Planned Parenthood in her life.

It’s a day for people to unite and say: We resist. We are strong. And we’re not backing down — not today, not ever.

Planned Parenthood has been fighting an uphill battle that looks to be getting considerably worse under the new Trump administration. CNN reported in January that Speaker of the House Paul Ryan announced the federal government would move towards defunding Planned Parenthood as part of the Obamacare repeal and replace program (which has been put on hold due to its sweeping unpopularity with Republicans and Democrats alike).

While the Obamacare repeal has been put on hold for the moment, Planned Parenthood is by no means safe. Both President Donald Trump and Vice President Mike Pence have said they are anti-abortion; Trump even attempted to get Planned Parenthood on his side during his fight to introduce a new health care plan by saying the organization could maintain funding if it ceased offering abortion services. Planned Parenthood President Cecile Richards had this to say in response, according to The Globe and Mail:

We will always stand for women’s ability to make decisions about their health and lives, without interference from politicians in Washington, D.C.

Planned Parenthood will keep fighting for the rights of the 2.5 million women who seek out its services every year. The organization will continue to fight for women's right to choose, women's (and men's) right to make decisions about their own bodies, and their access to quality health care.

On Wednesday, all women (and men who support women) have to do is show a little pink to let the organization know they appreciate its work.