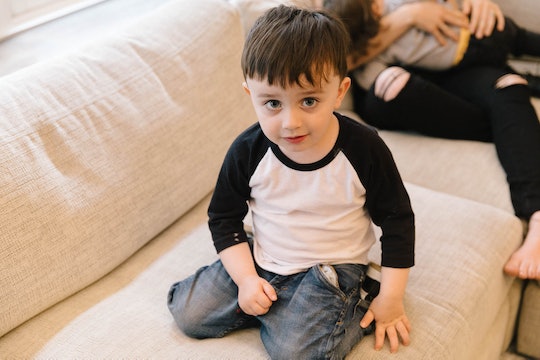 How To Clear Your Toddler’s Congestion, According To Experts

As any parent can tell you, cold and flu season with a toddler generally means coping with at least one stuffy nose or case of the sniffles. Unfortunately, for toddler parents everywhere, finding safe and effective ways to clear your toddler’s congestion can be easier said than done.

According to the American Academy of Pediatrics (AAP), most nasal congestion in young children is caused by a cold or other virus. The same site reports that your child will likely have between six and eight colds or other upper respiratory infections in their first two years of their life, which means as a parent you'll have more than a few cases of congestion to contend with. Unfortunately, there's no cure for the common cold, except waiting it out and treating your child's symptoms. To make matters worse, according the the U.S. Food and Drug Administration (FDA), cold and sinus medications aren't safe or effective for children under 2, so treatment options for your toddler's congestion are rather limited.

The AAP advises increasing your child's fluid intake to loosen things up, suctioning out any mucus, and using a cool mist humidifier to add moisture to the air and soothe their congestion. According to the American Academy of Otolaryngology – Head and Neck Surgery Foundation, if your child's congestion lasts longer than 10 days, or is accompanied by other symptoms like a headache, sore throat, cough, or bad breath, they might have a sinus infection and need to see a doctor for some antibiotics.

According to the AAP, there are sadly not many treatment options for a young child's stuffy nose from a cold... beyond waiting it out, of course. In the meantime, you can use a saline nasal spray or rinse to loosen their mucous and keep their sinus passages moist, the same site notes. You can then use a rubber bulb syringe or even a product like the NoseFrida —which lets you literally use your mouth to suck snot out of their nose (don't worry, there's a filter in place to prevent you from getting it in your mouth in the process) — to help clear their nasal passages.

To further soothe sore sinuses, the AAP advises using a cool mist humidifier or running warm water in your shower to generate steam. They do not, however, recommend cold medication, as they can cause dangerous side effects in young children. In fact, according to the FDA, over 1,500 children under 2 are treated annually in hospital emergency rooms for adverse effects of cold medications, including seizures, rapid heart rates, breathing trouble, and even death. According to the same site, cold medications containing decongestants and antihistamines are not safe or effective for children under the age of 4.

According to the American Academy of Otolaryngology – Head and Neck Surgery Foundation, if your toddler's cold just won't go away, and lasts 10 or more days or is accompanied by yellow or green mucus, a persistent cough, a headache, or bad breath, it's time to call a doctor. They might have a sinus infection — also called bacterial sinusitis — and need a prescription antibiotic to feel better.

The good news is that according to the AAP, once they start an antibiotic for sinusitis they should start feeling better in a couple of days. In the meantime, you might try a moist warm washcloth to relieve headaches or sinus pain, or a pain medication, like acetaminophen or ibuprofen, if they seem particularly uncomfortable, cranky, or feverish.

And while many parents might remember their moms rubbing menthol rub on their chests to clear their congestion when they were young, it can actually be dangerous for toddlers and babies. One study published in the journal Chest actually showed that products containing menthol and camphor, like Vicks VapoRub, which is made by Procter & Gamble, can actually cause breathing difficulties in babies and toddlers. As Bruce Rubin, M.D., the author of the study and specialist in pulmonary medicine, told Scientific American, in addition to being dangerous for kids, camphor rubs don't actually do anything to affect congestion in anyone — they just trick your brain into thinking you can breathe easier.

While there's not much you can do to help your toddler's congestion, the good news is that it shouldn't last longer than a week or two. As the saying goes, this, too, shall pass.