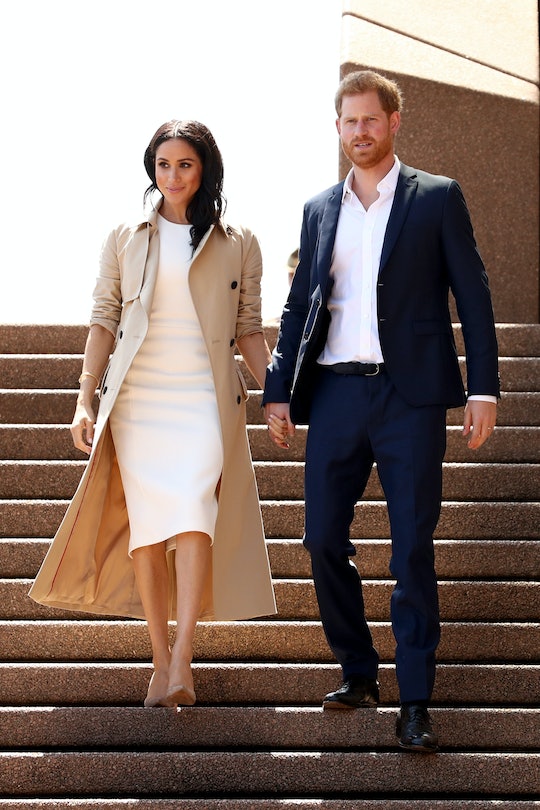 Thanks to Prince Harry and Meghan Markle's recent pregnancy announcement, royal fans across the globe are in a state of extreme excitement. Who can blame them? Hearing any couple's expecting is cause for celebration, but fans are especially excited to see the newest royal couple embark on starting a family together. And if you're so happy that you can't keep it to yourself, don't try to! Here's how to congratulate Meghan Markle and Prince Harry on their baby news when a tweet or comment on Instagram simply won't cut it.

Now, typically, when a couple you love announces a pregnancy, you get to congratulate them personally. And that might seem impossible when it comes to a royal couple, but there actually is a way to reach out to the Duke and Duchess of Sussex. Sure, you can't write on Markle or Prince Harry's personal Facebook wall, and you probably won't run into them on the street. But, in the age of tech and social media, people tend to forget about one form of communication that's always been around: Letters.

With that said, if you want to congratulate the happy couple, you are absolutely free to sit down and put all your feelings into a letter. As reported by Cosmopolitan, to send Markle and Prince Harry a personal congratulations, all you need to do is send a letter to this address:

HRH the Duke and Duchess of Sussex

There's no guarantee that the couple will write back, but that doesn't mean you shouldn't attach a return address. When it comes to big events like this, the royal family tends to acknowledge their well-wishers. Remember, as Hello! Magazine reported at the time, the couple sent out cards following their wedding and Markle sent thank-you cards to well wishers after her birthday, according to Harper's Bazaar.

If you're worried about formalities when it comes to writing a member of the royal family, there's no need to stress yourself out. The royal family website provides some handy guidelines for how to address the Queen.

Obviously, Markle and Prince Harry hold different positions within the monarchy, but it does show some good, basic guidelines. You can start the letter with "Sir and Madame", as suggested by Cosmopolitan, or by simply using their royal titles, "Duke and Duchess of Sussex". For closing, you probably don't need to say anything fancier than, "Sincerely, [your name]."

But, as the official royal website itself noted, "This traditional approach is by no means obligatory. You should feel free to write in whatever style you feel comfortable."

While Prince Harry and Markle's pregnancy announcement may have come as a shock to many, it was always known to royal fans that both wanted to start a family. For instance, when asked about starting a family during the couple's November 2017 post-engagement interview, Prince Harry said, according to Us Weekly, "Hopefully we'll start a family in the near future."

Well, you know how the saying goes — the future is now! On Monday, Oct. 15, Markle and Prince Harry announced that they're expecting their first child together. This news is particularly exciting, considering Prince Louis was only born in April and Pippa Middleton welcomed her first child on the same day as Markle's and Prince Harry's announcement. The royal family is growing rapidly, right before fans' eyes, so there's a lot to be excited about.

So, if you'd like send your well-wishes to the expectant parents, head over to the post office and buy some stamps. The Duke and Duchess of Sussex will undoubtedly love to receive your congratulations!