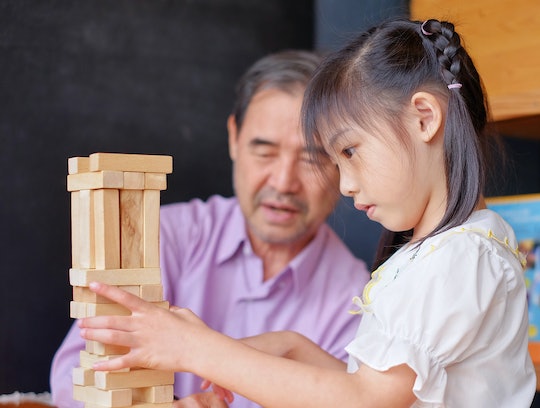 A kid hoarding random objects and asking the same question over and over probably doesn't sound so unusual to most parents, but in some cases, these behaviors can actually be symptoms of Obsessive Compulsive Disorder. Knowing how OCD is diagnosed in children, and the signs to look out for, can really help. (It can also help weed out all of the anxieties you feel the moment your kid has a "quirk.") The Anxiety and Depression Association of American reports that OCD affects more than 2.2 million Americans. It's classified as an anxiety disorder, one that is marked by unwanted obsessions and compulsions.

Dr. Tamar Chansky is a child psychologist, and the author of Freeing Your Child From Obsessive Compulsive Disorder. When I asked her about knowing when a child is OCD, she quickly corrected me, reminding me that a kid has OCD — it isn't something a child is. "We want kids to know that this isn’t who they are, but something their brain is doing — their wonderful brain — and they can train their brain to not trick them and get in their way."

Chansky says kids can show signs of OCD as early as 4 or 5, though the average age of onset is between 10 and 11. (An important side note: she says that sometimes when a very young child is showing signs of OCD, it could be due to an auto-immune illness known as PANDAS or PANS.)

Diagnosing OCD in kids isn't easy. "The main challenge is that kids, especially young kids, like routines. They like to master things, and like to have control. So they might like to do things a certain way... line up their toys, or organize their stuffed animals just so."

But Chansky says the key word here is like. With OCD, it isn't about liking things a certain way. It's about fear. "Kids who don’t have OCD do routines because it feels good. Kids who have OCD don’t want to do these routines, but are afraid that if they don’t, something bad will happen to them or to someone they love." These compulsions don't make kids feel good. Rather, they make them "feel sad, but also like they've temporarily warded off danger."

Chansky offered some key signs that a child might be struggling with OCD:

— Asking questions over and over even when they know the answer, because they need to hear it just right.

— Washing their hands over and over, or asking to wash their hands. Chansky labels this one a "true red flag," pointing out that kids generally don't enjoy extra hand-washing time.

— Having scary, intrusive thoughts of harm, or intrusive sexual thoughts. Chansky says this applies even to very young kids. For example, an OCD child might be afraid that they touched someone’s privates even though they didn’t, or afraid they stole something or cheated, even when they know they didn’t.

— And lastly, if a child apologizes excessively for things that they didn’t do.

If you're concerned your child might have OCD, Chansky says to talk to a pediatrician and consult a behavior therapist. She also encourages parents to read up on the subject, saying that parent training has been shown to be extremely effective in dealing with children's anxiety disorders.

"The prognosis for kids with OCD is very good. Treatment works. But left untreated, kids don’t outgrow these behaviors, they grow into them. It may limit their friendships, their ability to focus at school, their sleep, and their sense of self," she says.

Dr. Tamar Chansky, psychologist, founder and director of the Children's and Adult Center for OCD and Anxiety

More Like This
16 After-School Snacks For Hangry Kids
Tips For Apple Picking With Kids
Here's How To Keep Your C-Section Incision Dry
How Much Hair Loss Is Normal? 9 Signs You’re Losing Too Much Hair