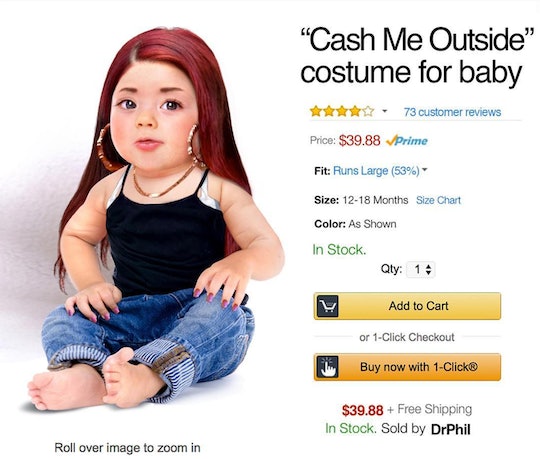 How To DIY A "Cash Me Outside" Baby Costume, Because Of Course That's A Thing

When I heard that some people are planning on dressing up as the "Cash Me Outside" girl for Halloween I wasn't sure how to feel. But when rumors started swirling that someone had taken it a step further and created a "Cash Me Outside" costume for babies and was selling it on Amazon, I was straight up shocked.

Red hair, a fitted spaghetti strap tank, and thick hoop earrings are just a fewof the elements needed to pull off the look. But let me backtrack a bit: For those of you who don't remember, the "Cash Me Outside" girl, Danielle Bregoli, appeared on Dr. Phil in an episode about unruly kids and became an internet sensation after bragging about her ability to steal cars without getting caught and challenging audience members to fight her with the phrase, "Cash me outside, how bow dah?" Obviously, the internet loved the new catchphrase, and she capitalized on her newfound fame by taking the opportunity to launch a rap career at the age of 14 and now goes by the rapper name Bhad Bhabie. Love her or hate her, you have to admit she's hardly wholesome inspiration for a baby Halloween costume.

When I saw a picture of the costume, I seriously think I went through the five stages of grief. Within the span of 20 minutes, I went from pure denial ("This can't be happening. This is far too absurd and I refuse to accept it.") to anger ("Who in their right mind would do this?!") to bargaining ("If I just write another compilation of the cutest baby Halloween costumes, maybe then no one will be able to resist dressing their child as an adorable woodland creature.").

The whole process involved a lot of muttering to myself, which earned several quizzical looks from my coworkers. If only they knew what I was dealing with.

I had almost made it to the acceptance stage when suddenly I was right back to denial. I don't need to accept this absurdity if it actually is just one big rumor.

To trusty Google I went.

After a little bit of digging around online, I found that the baby costume was just a joke created by the Instagram-famous meme maker adam.the.creator. I, thankfully, did not have to add a Danielle Bregoli costume for babies to my ever-growing list of why this year is a complete trash heap.

Looking back, the fact that the seller was listed as Dr. Phil should've been a dead giveaway.

In defense of us who were gullible enough to fall for the prank, Adam really went the extra mile with his ruse. He even built an entire fake Amazon page with an entire series of inappropriate Halloween costumes for babies. They ranged from a "Little Dictator" costume inspired by Kim Jong-un to a getup resembling the rapper Post Malone. Everything about the page is utterly ridiculous.

If you're into the whole "it's funny because it's so terrible and borderline offensive" thing though, I'm sure you're disappointed by the realization that you won't be able to dress your little bundle of joy up as the notoriously disrespecting teen turned rapper for the low price of $39.88 and free shipping if you're a Prime customer.

If you're really insistent on making it happen with or without the help of Amazon though, I have you covered. With the purchase of just a few pieces, you too can have your baby dressed in what will likely be one of the most divisive costumes of the season. Here's how to dress up your baby as "Cash Me Outside" girl AKA Danielle Bregoli AKA Bhad Bhabie.

Black crop tops for infants are shockingly difficult to find, so have your little one wear a sleeveless black dance leotard ($16, Amazon) instead. On the show, Bregoli wore ripped army green jeans rolled up nearly to her knee, but baby will be much more comfortable in these army green leggings ($8, Amazon). Bregoli's red hair is perhaps her most identifying feature, so don't forget a red wig ($17, Etsy). This one is technically for an Ariel costume, but who needs Disney princesses when you can have "Cash Me Outside" girl in all of her glory? Just cut off the little purple flower and you're good to go

Completing the look is all about the accessories. Bregoli wears giant clip-on hoops ($4, Claire's), edgy strappy sandals ($14, Kohl's), a gold chain, and, most importantly, long fake nails. Then all you have to do is teach her to rap and have a sassy attitude. How bow dah?

More Like This
20 Ways To End Your Elf On The Shelf For Good
15 Elf On The Shelf Ideas That Involve The Family Pet
If Your Kids Love Their Elf, You Don't *Have* To Put Him Away On Christmas
Experts Don’t Want You To Leave Your Fake Tree Plugged In