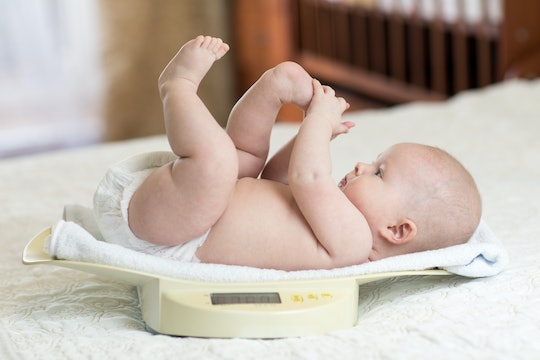 The most common concern I hear from breastfeeding mothers — and a concern I also had myself — is how to tell if your baby is getting enough milk. How can you tell how much they’re eating? I had never heard of this before, but apparently there’s something called a “weighted feed,” and lots of moms are recommended trying it. I decided to find out how to do a weighted feed so I can make sure my son is getting enough milk by asking the experts. Turns out, the opinions on how well a weighted feed works can vary.

Dr. Sherry Ross, an OB-GYN and women’s health expert at Providence Saint John’s Health Center in Santa Monica, California, says to Romper in an email interview that a weighted feed is the process of weighing your baby before and after you nurse them to see how much they've eaten, based on how much weight they gained. However, according to Patricia A. Evans, nurse practitioner and certified nurse midwife at MemorialCare Orange Coast Medical Center in Fountain Valley, California, the act of doing a weighted feed “can drive a new mom crazy and actually decrease the amount of milk produced.” Yikes.

As far as accuracy with this method, both Evans and Ross say there’s not so much. “Weighing a baby immediately after breastfeeding is not accurate as babies tend to take in different amounts every time,” Evans tells Romper. Ross adds, “Even though a weighted feed is the easiest way to see how much breast milk a baby is consuming, it’s an inaccurate measurement."

Lactation consultant Danielle Downs agrees, and says while it's a great way to collect data when there's a feeding problem, weighted feeds only offer one data point, so it's pretty meaningless. "When creating a care plan, [International Board Certified Lactation Consultants] IBCLCs look at patterns, trends, and the entire growth history. Most of the time, parents are more hindered than helped by having a home scale. Home scales can be a tool for babies with special feeding needs, but the vast majority of healthy full term babies don’t need weights to reflect their feeding success," she tells Romper in an email interview. However, Downs did provide a video explaining how to do one, should you be so inclined.

So how can you tell if your baby is getting enough milk at each feed and you’re producing enough? Ross and Evans say to look for signs. “If they fall asleep or pull themselves off the breast, they are probably full,” Evans says. “Babies know when they’re hungry and when they’re full, so listen to your baby. If they are crying and fussy, they’re probably hungry. They will take varying amounts each feed — just like sometimes as adults we’re more hungry some days more than others. As always, if you’re concerned, talk to your pediatrician.”

Ross adds, “Watch for signs that the baby is eating on a regular basis each day. Normally a baby will breastfeed eight to 12 times during a 24-hour period. If you pump your breast milk and use a bottle to feed your baby, you can easily measure how much your baby drinks in a 24-hour period.” Another way to make sure baby’s eating enough, according to Ross, is to “observe your baby’s behaviors and normal breastfeeding cues such as rooting, licking, sucking, and moving their head around.” This tells a mother her baby is hungry and is displaying normal behaviors for feeding, she says.

You can also make sure to check your little one's diaper. According to Downs, "Stools are a better indicator of intake than wets. Babies should stool at least four times every 24 hours. The stool should be at least the size of the palm of your hand. Skid marks and small squirts are not enough. Babies should gain 1 ounce per day from age 2 weeks to about 3 to 4 months. Less gain than that can lead to compromised growth and development. Babies triple their brain size in the first year, and that uses a lot of calories." According to a Breastfeeding USA article, the International Lactation Consultant Association says after day one, your breastfed baby should be having at least three stools per day and six wet diapers per day by the time they’re 4 days old. According to New Kids Center, from 0 to 1 month old, babies should have 10 to 12 dirty diapers a day. From 1 to 5 months old, they should have eight to 10 diapers, and from 5 months old to 12 months old, they should be having at least eight diapers.

So it looks like a weighted feed may not be the most accurate representation of whether your baby is getting enough milk, according to experts. Watching for the “hungry” and “full” cues of your baby and counting diapers may be the way to go. If you're really concerned with your baby's weight gain or eating habits, reach out to a lactation consultant for help.