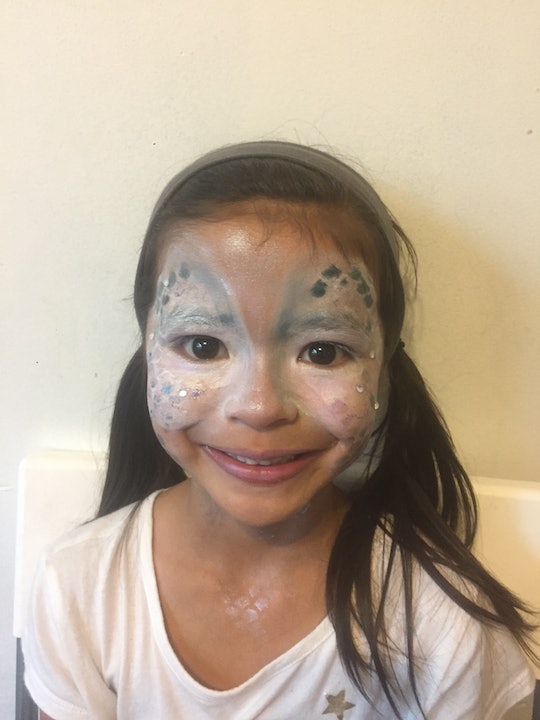 After October first, it's all Halloween all the time at my house. We watch Nightmare Before Christmas and Hocus Pocus just about every day, and my desk may or may not look like the receptionist's stand at a haunted brothel. I can't help it, I just adore the season. It's one of the few holidays everyone in my family celebrates. When your family is basically all the religions, it's a pretty big deal. So when I was asked to figure out how to do mermaid face paint for kids, I may have peed in my pants.

My daughter definitely takes after my sense of theatrics. She makes her own "YouTube" videos (that never get published), she puts on shows for my husband and I, and she constantly tries to dress up her dog and cats like they're going on some fabulous parade. Thankfully, the dog and at least one of the cats doesn't care. Our cat, Trout, though? He mewls his displeasure over the opprobrium of it all before promptly hiding for a week.

However, doing her makeup brought up something I didn't expect. When we started, my daughter looked over to me as I was using the light silver/white stick on her face and said, "Mama, there are no brown mermaids, can I still be one?" I'll admit, what came next was not my finest parenting moment. Being the white mother of a mixed-race daughter, I often don't see what she sees because of a lifetime of representation and privilege. I just said the first thing that popped into my mind, which was "The eff there isn't. It's just that only the dumb red-headed ones beach themselves and get caught." That made her laugh and appeased her 6-year-old mind, but there is a problem with representation and there's a problem with the kits that are sold. Many simply lack pigment enough to really pop on brown skin. Sure, I could use pricey Ben Nye theatrical cosmetics, but that would be easily $150 in Halloween makeup.

Don't worry, though. We found some fantastic brown mermaids after that. No matter how you or your little one look, here's a step-by-step guide for giving them the mermaid face paint of their dreams.