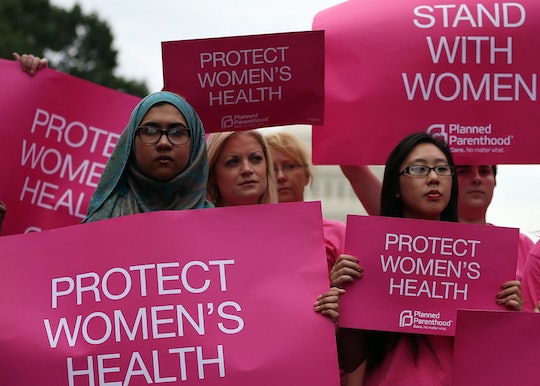 Donate To Women Hurt By The Title X Cuts

Women's health suffered a major blow this week. With Vice President Mike Pence’s tie-breaking vote in favor of a bill that would allow states to withhold federal family planning funds from Planned Parenthood and other abortion providers, Congress is now on its way to making the GOP’s political agenda to repeal the many vital parts of the Affordable Care Act a reality. That’s why knowing how to donate in response to the Title X funding vote is more important than ever before.

The measure would repeal the Obama-era regulation that bans states from blocking healthcare providers from receiving Title X grants, government funds that cover services like basic well-woman exams, breast and cervical cancer screenings, birth control, pap smears, and testing for HIV and sexually transmitted infections — but it cannot be used to channel money to pay for abortions, which is laid out under the Hyde Amendment. Without this funding, millions of low-income women’s access to affordable healthcare will be at risk and to keep these essential clinics running, they’ll need all the support they can get.

Dawn Laguens, executive vice president of Planned Parenthood, explained the repercussions of the funding vote best: "Four million people depend on the Title X family planning program, and this move by D.C. politicians would endanger their health care," she said in a press release on Thursday. "This would take away birth control access for a woman who wants to plan her family and her future. Too many people still face barriers to health care, especially young people, people of color, those who live in rural areas, and people with low incomes."

Planned Parenthood is not the only healthcare provider that is risk of losing funding; Dozens of other family planning clinics across the nation receive Title X funding as well, according to its 14-page directory of grantees in 2016. These clinics, organizations, and programs are located in every region of the United States and if President Donald Trump signs the bill (which he is expected to), it will then be up to each individual state to decide whether or not they will receive any future federal funds.

While Pence's vote doesn’t do anything to Planned Parenthood in the immediate future, it does pave the way for any further attempts to fully dismantle the non-profit giant and other providers. That's why one of the most important things you can do right now is donate to show your support and protect women's reproductive healthcare rights. Here are some ways to do just that:

Considering the fact that Planned Parenthood has 650 health centers throughout the United States, your donation will be able to reach a large number of women, teens, and men in need. You can choose to either make a general donation or give to a specific Planned Parenthood affiliate. Make a one-time or recurring donation here.

Make A Donation To Your Local Family Planning Healthcare Provider

If you'd like your money to reach your community on a local level, browse through this list of Title X grantees to see if your state's funding is at risk. From there, simply go to its website and make a donation there.

If you don't have cash to spare for a monetary donation, your time is equally valuable. Here's a couple of ways to do so:

There's only so much that can be done as we await Trump's signature on the bill. But, during times when it might feel like you're powerless, donating to keep these services alive and active is one way to take back control.