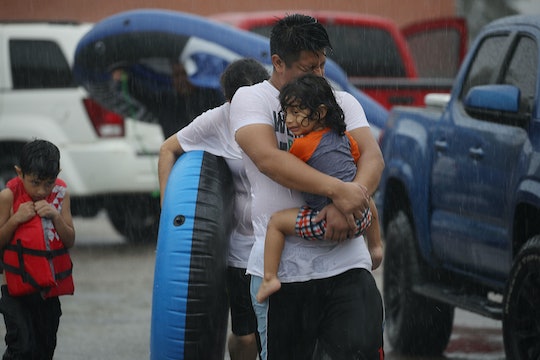 How To Donate Supplies To Kids In Texas

It's an awful thing, feeling helpless. So many of us watch in horror as the flood waters rise in Texas and Louisiana from Hurricane Harvey, wanting to help but not quite sure what to do. Especially when we see the children who have been displaced from their homes and must be feeling terrified. If you want to help, there are several ways you can donate supplies to kids in Texas after Hurricane Harvey. Because their needs tend to be more immediate.

The tropical storm, which some climatologists have categorized as the "worst in U.S. history," according to AOL, has shown little sign of abating in the upcoming days. Hurricane Harvey has caused flooding in major areas like Houston, where the city is virtually swimming in several feet of water. And there is likely significant rainfall expected still to come. At least 30 people have already died in the storm, according to The New York Times, with many more injured. People have been forced to abandon their homes and find refuge in shelters throughout the area, unsure if or when they will be able to return. Children had to go to shelters with little more than the clothes on their backs, and they desperately need supplies. Here's how you can donate.

While donating kids clothing might seem like a great idea, The U.S. Center for Disaster Information notes that donated physical items are not always the best way to go about helping. These sort of donations, according to ABC News: "require transportation — which is expensive and logistically complicated — and a pre-identified recipient on the ground who will receive the shipment, pay customs and other fees, sort and distribute the items."

Also keep in mind; donating your used items is not helpful, according to ABC. Anyone hoping to donate their own children's clothing might want to reconsider and look into relief organizations to find out what might better serve the children.

Babies need diapers, regardless of whether there is a hurricane happening or not. The Texas Diaper Bank Disaster Relief, based in San Antonio, has teamed up with Amazon to distribute diapers to shelters. You can visit the website to help buy diapers for infants in critical need of them. Amazon has also set up a Wish List for the American Red Cross, where people can purchase disinfecting wipes, pillows, playpens, and first aid kits for those affected by Hurricane Harvey.

As relief efforts continue, cash donations remain one of the easiest and most helpful ways to support flood victims. Houston Mayor Sylvester Turner has asked donors to head to the Greater Houston Community Foundation website as a way to connect with local non-profits who need funds.

You can also text money to the American Red Cross if you are an Apple customer. However you might plan to help, it's important to make sure the charity of your choice is established and credible; with that in mind, check out this Charity Navigator for help.

However you might decide to support the children affected by Hurricane Harvey, you want to know that your donation is getting to the people who need it most. Give wisely.