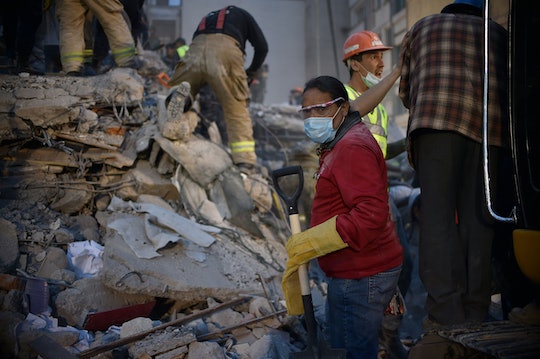 How To Donate To Mexico City Earthquake Victims

On Tuesday, just hours after commemorating the anniversary of a 1985 earthquake that took nearly 10,000 lives, Mexico City was hit with another 7.1-magnitude earthquake. If you're wondering how to donate to Mexico City relief efforts, there are many charities, both local and international, that welcome both monetary gifts and supplies. Those in the area are encouraged to bring supplies and donations to local collection centers; Forbes México has a list of locations and requested items (if you're just visiting and can't speak Spanish, you can access the site with Chrome and click the Google Translate icon on the right side of the URL bar).

Those who aren't local can still help by donating online. If you prefer giving to an organization you're familiar with, many large and well-known charities have set up dedicated funds for Mexican earthquake relief. You may also consider giving to a local charity, though, since going through one or more intermediaries may lessen the impact of your donation, both in actual dollars, and by taking longer to get to those who need it most. This is an emergency situation, and supplies are needed immediately. However, it will be a long road to recovery as Mexico City residents rebuild their community, so waiting until payday isn't necessarily a bad thing. Here are a few to get you started:

The search engine-turned-SkyNet already has a hand in everything else, so why not? Google has partnered with the Center for Disaster Philanthropy, a U.S. 501(c)(3) charitable nonprofit that distributes donations to local nonprofits. It's a bit of a winding-road way to donate, but if you're pressed for time, it's definitely the easiest option. If you've already saved your credit card information on your browser, it'll only take you four clicks from beginning to end. Here's the first one.

Global Giving is another umbrella-type nonprofit that's focused on providing food, water, shelter, medicine, and hygiene products in the immediate aftermath of the quake, as well as long-term recovery assistance. Its Mexico Earthquake Relief Fund will also benefit the victims of the deadly quake in Oaxaca earlier this month. The organization is partnering with local nonprofits.

If your biggest concern is the children of Mexico, UNICEF will probably be your choice of charities. In response to the Oaxaca earthquake, the organization has created "child-friendly centers" to provide shelter and safety for kids affected by the disaster, and is also providing supplies, emotional support, and even temporary learning spaces so the kids' education doesn't suffer during the recovery.

If you want to get hyper-local with your giving, the Mexico City government has its own "Fund for Natural Disaster Assistance in Mexico City" called FONADEN CDMX, the first of its kind nationwide. They're accepting donations via bank transfer, which has the added bonus of making you feel like a jewel thief from an '80s movie.

Brigada de Rescate Topos Tlaltelolco is a volunteer rescue organization unrelated to the Mexican government or other charities. Originally formed to address rescue efforts after the 1985 Mexico City earthquake, it specializes in urban search and rescue efforts in collapsed structures. As of Wednesday afternoon, its website was down (here's hoping that's due to an overload of donation attempts), but you can PayPal them at donativos@brigada-rescate-topos.org.

If you'd prefer the best of both worlds — a name you know and trust, and a local organization, Cruz Roja Mexicana, the Mexican Red Cross, is accepting donations on its website, and has also set up an Amazon wish list of the most in-demand supplies, from tools for the rescuers to hygiene products for the victims. Amazon will send the items you purchase directly to Cruz Roja Mexicana.

Whichever one of these charities you choose, you'll know that it was money well spent, and it'll go a lot further than a half-hearted tweet or a temporary avatar filter.