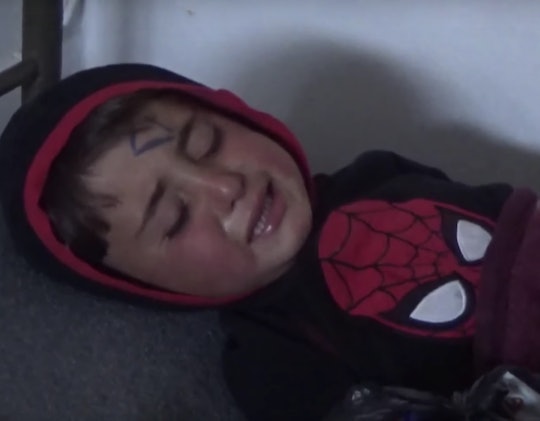 How To Help Syrian Kids Hurt In The Chemical Attack

One day after a suspected chemical attack devastated a residential town in northern Syria, key players in the country's ongoing civil war are already pointing fingers and deflecting blame. But there's simply no denying the harrowing fact that 72 people are dead as a result, and that 20 of these innocent victims were children, according to ABC News. And the repercussions of the atrocity don't end there: More than 500 people were injured. It's another installment in the inhumane slaughter that has plagued Syria for years, and, again, most of the world is disgusted, outraged, and ultimately feeling powerless. So, here's how to donate to Syrian kids hurt by the chemical attack, because it's a small but significant step you can take right now.

After the attack, CBS News reported that video footage from the scene showed children's bodies piled in the streets of the town of Khan Sheikhoun. Those who survived, at least initially, gasped for breath and convulsed in overcrowded hospitals. Doctors Without Borders, a nonprofit whose members worked in at least one of these facilities to treat victims (and one to which you can donate funds directly, to help fund medical care), said in a statement that "patients' symptoms are consistent with exposure to a neurotoxic agent such as sarin gas."

In short, the carnage was and is a shameful testament to the reaches of human cruelty — as was the heartbreaking situation in Aleppo before it fell from the rebel's control to the government's in December.

But as the politics of war rage on, real people are suffering the consequences. This is where those around the world who are paralyzed with a gut-wrenching sense of helplessness come in. A group called NuDay Syria, which "send[s] aid into Syria and bordering countries, keeping [mothers with no male breadwinners] and their priorities and needs in mind," according to its website, has turned its attention to the town of Khan Sheikhoun. Having in the past carried out such humanitarian tasks as paying for goats whose milk would be used to feed babies to be smuggled into Damascus, the nonprofit is now crowdsourcing funds to distribute food baskets to the survivors of the suspected chemical attack.

And, as the group points out on its Razoo page, there is no time to waste:

We have CHILDREN and families suffering from barely surviving the horrific chemical weapons attack that happened early in the morning of April 4 in the village of Khan Sheikhoun in Idlib. NuDay Syria is ready to help with medical efforts, humanitarian aid, and food. We need your help.

Among those who need this help desperately are children — and they may have been separated from their families. "Many parents were looking for their children," Abdulhai Tennari, a lung doctor in Idlib, the province that's home to Khan Sheikhoun, told ABC News. "They don't know what happened with them because patients were distributed to many hospitals. Many people died, parents died, so because of this there were many children without families and nobody knew who they were."

Bringing these people food won't solve all of their problems, but it will help to alleviate some of their unimaginable suffering. On Wednesday, NuDay Syria distributed 200 of these baskets to people in the town directly affected by the attack, and another 100 to families that had fled. Here's what donations help to supply to families in each food basket:

The Russian government, an ally of the Syrian President Bashar al-Assad, insisted after Tuesday's attack that it happened because the opposing rebels had stored chemical weapons in a warehouse, according to ABC News. The Syrian Air Force simply struck that building, Moscow's story goes. But a chemical weapons expert named Col Hamish de Bretton-Gordon described that version of events as "pretty fanciful" and "unsustainable" in an interview with BBC News. In fact, even though the Syrian government has insisted that it's too "honorable" to commit such an act, Syria Civil Defense volunteer Abdullah al-Hussein told ABC News that there was no warehouse in the residential area.

Finding out what really happened, of course, could not be more important. But it's also vital to remember that, as a result of fighting among those seeking power, people who just want to live their lives are suffering in a way most of the world cannot comprehend.