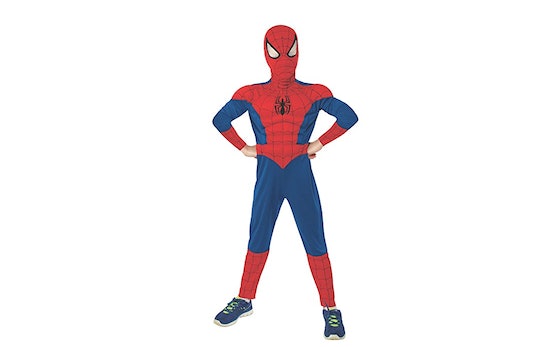 How To Dress Your Kid As Spider-Man For Halloween, Because With Great Costuming Comes Great Candy

When it comes to Halloween costumes, one type of character remains popular year after year: superheroes. Even for a holiday that celebrates all things dark and spooky, plenty of kids prefer to dress up as the quintessential good guys. If your little one falls in these ranks, knowing how to dress your kid as Spider-Man for Halloween can be so helpful. After all, there's something sweet about a child who wants to be the hero of the day.

Since his first appearance in 1962, Spider-Man has captured the imagination of fans the world over. His great powers emerged after brilliant-but-shy Peter Parker was bitten by a radioactive spider at a science exhibit, gaining the strength, agility, and climbing capabilities of an arachnid, according to Marvel's official website. After gaining control of his powers — and donning the iconic red and blue suit — Spider-Man faced villains such as Dr. Doom and Doctor Octopus (AKA Doc Ock). His adventures have wowed fans for generations, resulting in tons of comic books, several television series, and appearances in many major motion pictures. In fact, the most recent installment, Spider-Man: Homecoming, pulled in $330,245,988 domestically at the box office, according to Box Office Mojo. It looks like the friendly neighborhood Spider-Man still captures the imagination of kids everywhere.

Given the character's rampant popularity, putting together a Spider-Man Halloween costume for your kiddo will be a cinch. You can draw inspiration from the classic costume and look, or put your own spin on a unique Spidey getup. Throw in a few accessories, such as light-up spider shoes or web-slinging gloves, and you're all set for the most spine-tingling, adventurous Halloween yet.