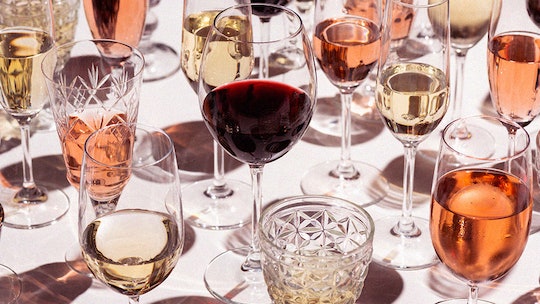 8 Ways To Drink Less This December (No, Really)

Eight steps to making it from Thanksgiving to the New Year without face-planting.

This is an article for the moms who drink, who tipple because it relaxes them, and it's yummy, and raising kids is so f*cking hard. (Also, in-laws and our own parents and life in general.) It's for the moms who sometimes feel a scourge of guilt, because our kids are watching. Who know we're supposed to be dealing with the anxiety and the drudgery and the judgment from other parents and society out of view, and definitely not by drinking a glass of wine filled right up to the tippy-toppy part. (Especially since we know — WE KNOW — that we are the wine industry's target market, and that they know — THEY KNOW — drinking causes breast cancer.)

This is for the moms who recognize that pained and slightly revolted look from our partners when that second (or third) glass turns into a third (or fourth). Who stridently defend our choice to drink because we live in a country that cherishes fetuses but craps on children (and moms). Who secretly wonder whether the internet is right and we should quit drinking altogether and try transcendental meditation, therapy, or green tea. The moms who, for the most part, hold it together, but then, once a year, in the worst possible circumstances — a holiday gathering — have one glass too many and dig a hole, at the bottom of which are two things: 1) regrettable behavior, and 2) a hangover to rock the ages (why does that sh*t get so much worse after 35?).

First of all, if you're reading this, you're probably wondering whether it's even possible to not drink, or to drink less, during the holidays. NPR is here to tell you, yes, it's possible. Why? The belief that there are alcoholics and everyone else, and that we're all helpless to our habits depending on where we fall, is outdated. (In fact, the term "alcoholism" is outdated: For years it's been "alcohol use disorder," with severity that ranges from mild and moderate to severe.)

Don’t spiral on me: You have choices. Quitting is one. Moderating is another.

1. Write down your goals. Want to make it through a holiday party on two drinks? Through Christmas Eve on a cranberry and soda? Write it down, says Gail Matthews of Dominican University of California. In 2015, Matthews, a clinical psychologist, did a study showing that people who wrote down their goals — and created actionable steps toward them and then shared them with a supportive friend — accomplished significantly more than those who simply thought about their goals.

Are you hearing what she's saying? Don't just walk into a party thinking, I'm not going to drink this time. It doesn't work that way.

2. Have a plan. Matthews calls it "formulating action commitments" (I call it coming up with mocktails; see below). What's key, once you identify your triggers, is having a plan to replace your habitual response — say, chugging a beer — with something else — preferably, something pleasurable. An unscientific poll of friends turned up some repeating themes in this area such as drinking something yummy that seems alcoholic, exercising real hard beforehand, and substituting with cake.

Self-righteousness is pleasurable, too, says Ami Sheth, mother of a 3-year-old: "I would forego anything that resembles alcohol and just drink green smoothies and green juices so you can make everyone else question their life choices. Drink it: on ice, with a smug look, while uttering righteous phrases like, 'Why wait till January to live my best life?'"

3. Get a teammate. Matthews' study called in external accountability. You know who I mean: not your dingbat friend who will excuse your drinking because they want to drink, too. I mean your stand-up, principled friend whose feedback hurts so good because it cleaves your weak-willed self from your aspirational persona. Recruit that person in advance, and text them before walking into a holiday party: Entering dragon's lair. Have six-pack of grapefruit seltzer. Will drink no more than two glasses of wine. That person, if well-chosen, will text back with, "YOU CAN DO IT. THOSE PEOPLE ARE F*CKERS. YOU'RE STRONG AND AMAZING. REMEMBER, YOU VISUALIZED WALKING AROUND THE BLOCK AT EXACTLY 7:35 P.M. I'LL BE WAITING OUTSIDE WITH A HAMMER IF YOU COME OUT OF THERE DRUNK."

Speaking of walking around the block...

4. Take it outside. This is according to Christine Koh, co-host of brainy/crunchy podcast Edit Your Life and co-author of Minimalist Parenting: Enjoy Modern Family Life More by Doing Less (yes, please). "Part of what happens for many people around the holidays is that they feel trapped," says Koh. "Physically, yes, but also emotionally, in particular if there are toxic family relationships or general tensions with people you need to share space with. Going for a walk helps do a number of things: You literally can get some space. The fresh air will help remind you to breathe in and out. And, if you are like me and like to find the big meaning in the small things, then your footsteps will remind you that there's nowhere to go in life but forward." (Well... also backward to fixate on shameful actions from the past, but forward is probably better.)

5. Visualize. Want a gold medal in self-control? Do what Olympians do, says Nicole Detling, a sports psychologist who works with the U.S. Olympic team: Imagine the future — ahead of time.

"Muscle memory is housed in our brain, not necessarily in our muscle," says Detling. (I did not know that.) "When our brain visualizes something, our muscles are innervated in the same sequence. If I imagine myself throwing a ball, my shoulder muscles contract, my fingers are contracted holding the ball — they're tiny contractions, so small that we don't feel them.

"Those nerves are surrounded by a myelin sheath, conductors for an electrical current. The more that nerve is innervated, the stronger and thicker that myelin sheath becomes. Over the course of time, that becomes the path of least resistance, of best connectivity. You're creating this memory in your body of how to do this by using your brain."

"Imagery is what combines all the senses, including moods and emotions," Detling continues. "If you know there's somebody who sets you off, spend some time doing imagery of connecting to those feelings. And practice ahead of time how you're going to respond. Maybe it's taking a deep breath, maybe it's walking to the bathroom. Or [hot tip:] naming an animal for every letter of the alphabet."

You've started to recognize that you're going to do this thing that you're not even conscious has become a habit.

6. Train yourself. Pick the behavior you're going to do instead of drinking and reward yourself for it, says Joan Orr, a scientist working in the field of applied behavioral analysis who, with two other scientists, created a successful training technique called TAGteach.

"The first step is to change your thinking," says Orr. "Instead of thinking about what you're not going to do, come up with a behavior and think, that is what I'm going to do. Say you don't want to have that third drink. Instead, put the bottle away, go outside and have five minutes of fresh air, eat something healthy, go and play with your kids."

For self-training, Orr suggests making something called a Tagulator, brilliantly marketed as "behavior change technology for under $5" OOH CRAFTS YES PLEASE. It's a string of beads you move from one end to the other.

"We recommend you take a breath first," she says. "So you take a breath, pull a bead, and then you can still do the bad thing." WAIT WHAT. "But then you're replacing mindlessly doing something by taking a breath first, which gives you a second to pause and think, do I really want to do that? Maybe I do." OF COURSE I DO. "But you've started to recognize that you're going to do this thing that you're not even conscious has become a habit. After a few times of that, you replace taking a breath with a conscious decision."

So you take the Tagulator to a party. When you have a glass of water instead of a beer, you move a bead.

Great! But why on earth would a string of beads keep me from drinking a glass of delicious, fruity wine? "Success is the biggest reinforcer," says Orr. "It is with all of us. There's a dopamine release when the signal comes to tell you that reinforcement is coming" — the moving of the bead. "It's not the good thing happening that causes the dopamine release in the brain — it's the expectation of a good thing happening." THIS EXPLAINS WHY PLANNING VACATIONS IS PURE PLEASURE FOR ME BUT OVER AND OVER THAT FIRST DAY IS A BEAR.

7. Forgive yourself. Detling, the sports psychologist, has a scientific basis for this advice: "My sons are 15 and almost 13," she says. "I've drunk that third glass of wine. But if you replay that mistake over and over again, that is what is most likely to happen next time" — because now that's what you're visualizing.

8. Just quit, for a bit. Annie Grace, a rather charming and enthusiastic former marketing executive, wrote a book about quitting drinking and, more importantly, created a free 30-day program called the Alcohol Experiment. The experiment — don't call it a challenge! — aims to help you "renegotiate your relationship with alcohol" and take a break (or not! Just read the emails every day! No pressure!). It can't hurt, and at least it'll help you get through the holidays.

In case none of this works, my former neighbor Taalib has this advice: "Check this out for some willpower: Remember that whatever you are going through in life, you are never a champion without an opponent. Peace, love, and lots of life and joy! Make the most of it in our living heaven (smile). You can do it, Sista."

Alternatives To Drinking That Third Drink

More Like This
My Queer Pregnancy Began In A Cold Doctor’s Office, But It Was Also Weirdly Romantic
Meena Harris’ New Children’s Book Tells ‘The Truth About Mrs. Claus’
Macy’s Thanksgiving Day Parade Has Been Delighting Families Since 1924
18 Holiday Gift Ideas Perfect For Your In-Laws