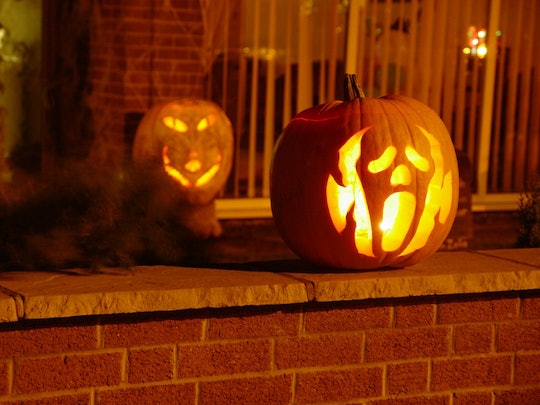 How To Explain Halloween To Your Kid, Because It's More Than Goblins & Ghouls

One of the things I love most about children are their insatiable curiosity. Even at two years old, my daughter asks "What's that?" every time she hears a sound or sees something new. And with Halloween coming up, you're bound to hear a question or two about the whole process. Being knowledgeable (or at least, being able to Google) is a big part of being a parent to your kids — they look to you for everything — so knowing how to explain Halloween to your kid is pretty important.

If your kid seems super stoked about Halloween and isn't asking a lot of questions, then your job's pretty easy. But for a lot of children, Halloween can be either really confusing or really scary. Why do you have to dress up to get candy? Why are people dressed like scary things? Are ghosts and monsters and witches real?

Then there's the whole stranger danger dilemma. You're telling your kid it's OK to knock on a stranger's door and ask for candy, but they aren't allowed to talk to a stranger in any other setting? Can you see where a kid might have some questions?

When it comes to talking to your kids about Halloween, look at their ages. If your child's in school, Time for Kids has some great resources for them to read to learn the history themselves. If you want to be the one to explain the actual historical origin, then just do your research. You can dive right into the actual Celtic traditions or you can simply tell them that at one point, people thought the living and the dead would cross paths on Halloween and dressing up was a way to ward off some of the unkind spirits.

But for younger kids, any talk of the dead could be spooky and completely turn them off of Halloween. Halloween expert Lesley Pratt Bannatyne told Care.com that being age-appropriate is really important when discussing Halloween. She suggested editing the scarier parts of the story and stick with talking about Halloween as a holiday where people get to dress up as someone they aren't for the night. (Which, hey, is still true and has historial accuracy.)

If you're not into trick-or-treating or you just want another explanation, talk to your kids about how Halloween used to symbolize the end of the harvest season. According to History.com, Nov. 1 was marked as the end of summer and the beginning of a long, cold winter (often associated with death, but leave that part out). Live Science noted that while research is limited, many believe that this time was used as an annual communal meeting to gather all of the resources everyone would need for winter and to bring animals in from pastures. Sort of like a celebration, but more like preparing for the rough winter that was to come.

Historical accuracy aside, you can always tell your children it's a day for dressing up, being with friends and family, and having fun. But if you're worried about the implications of strangers associated with Halloween, talk to them about the difference. The National Crime Prevention Council suggested teaching your children what an unsafe situation is and what a safe situation is. When they are with you, speaking to a stranger is safe. But if they are alone and someone offers them a chance to come into their home and eat some candy, that is not safe.