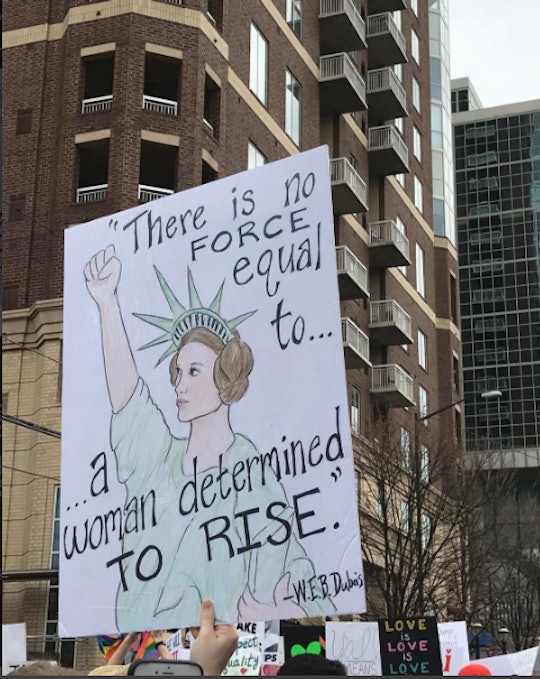 How To Explain Women's Day To Kids

International Women's Day is more than just a day to feel inspired and empowered; it's a day to remind your children — girls and boys — that women matter, that women are important, and that women deserve to be recognized. If you're wondering how to explain International Women's Day to your child, I get it. Maybe you're worried that your kids will ask why the world doesn't celebrate women every day. Maybe you're nervous that your son will ask when he gets to celebrate being a man, and then you'll have to refrain from making a Samantha Bee joke. Maybe you're just not sure how to approach the topic of sexism, of the patriarchy, and of the importance of feminism right now.

But hey, it's time. And there's no better way to start those conversations than by explaining International Women's Day to your child.

Originally created in the early 1900s, International Women's Day, according to the official website, is "a global day celebrating the social, economic, cultural, and political achievements of women." Because the day doesn't belong to any specific group or government entity, it's the perfect way to celebrate all women from all walks of life and to unite them together to reflect on the strength and perseverance of women.

If your children are old enough to go to school, they can probably name a few important figures in history. George Washington, Martin Luther King, Jr., Thomas Edison — all incredibly important to the world, but all men. To begin explaining International Women's Day, ask your children to name some women who have made a difference in the world. Hopefully, they can shout out Harriet Tubman, Susan B. Anthony, Rosa Parks, Helen Keller, but they may not. And that right there is the lesson in why International Women's Day is so important.

Explain to your kiddos that there have been times in history, both recent and not-so-recent, when women have made huge contributions to the world and their achievements were not celebrated as much as a man's contributions. Talk about the challenges women face, like having to balance motherhood and work (when men aren't expected to juggle both) and having to fight stereotypes. Explain that when a woman is misheard in the boardroom and tries to speak up, she's often called "bossy" or "loud" or "rude." Teach them that for a long time, society valued a woman based on how well she could birth children and run a home, but that men were expected to make the bigger contributions to society. Talk about the women in their life that have influenced them and how their stories are often lost in history.

And combine all of that information into a succinct explanation: much like a birthday that is all about one person, International Women's Day is dedicated to all women. It's to celebrate the lives and achievements of women, whether they've been recognized for it or not.

When you put it like that, your kid should understand. Like blowing out the candles on a birthday cake for their grandpa and sharing stories of his life to celebrate him, let International Women's Day be explained as a giant birthday for all the women of the world. Blow out some candles, appreciate those women, and feel grateful for another year of celebrating them. (Bonus: your kid probably likes cake, so this can help them listen even more.)