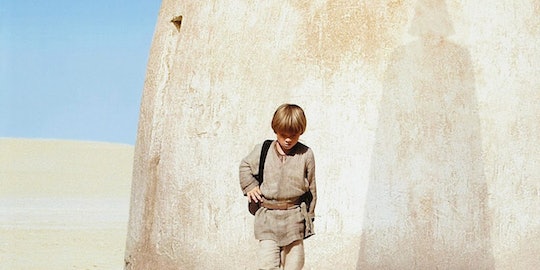 How To Explain 'The Phantom Menace' To Your Tiny Jedis

When it's time to introduce your children to Star Wars (and trust me, there's a time), you're going to feel a lot of things. Excitement, delight, and fear that you'll have to cart them off to Siberia if they loathe the series. But you'll also have to do a little bit of prep work. Though Star Wars is one of the greatest film sagas ever, it can also be heavy on their little brains. You're going to have to answer a lot of questions like, "Who is Dark Vader?" and "What's that big teddy bear guy saying?" And you're pretty much going to have to learn how to explain The Phantom Menace and the rest of the movies' plots in kid terms for their full understanding.

That's the hard part, right? Explaining the plots, the storylines, and how they all go together. It can be especially difficult depending on order you watch the Star Wars movies with your kids. If you follow the release order, starting with Episode IV, you're going to have a million more questions than normal from your kids. If you follow the saga in its episodic order, the surprise of Darth Vader being Luke's father is ruined and then what's the point? It also doesn't help that Episode I, II, and III are really just background to the previously released Episode IV, V, and VI, prompting more confusion from your kids. They may also be super bored learning about Jedi history, honestly.

But let's go with introducing your kids to Star Wars in the episodic order to get them ready for Star Wars: The Force Awakens on Dec. 18. It's time to turn on Star Wars I: The Phantom Menace and explain it to your kid.

How do you do that? Well, quickly turn it off and move on to Episode II.

Look, George Lucas actually stated that The Phantom Menace was a kids' movie. So it makes sense that as an adult we find the characters childish, the jokes watered down, and the dialogue a dud. Plus Jar Jar Binks? The worst. But I can't see it as a movie for children either. For one thing, there's a lot of talk about trade disputes and politics that may go completely over your kids' heads. And as a movie that is part of a saga, it's full of characters your kids are never going to see again and ones that aren't even worth mentioning.

Plus, everything that happens in The Phantom Menace? It's all going to be restated in Episode II.

Your kids won't have to see Darth Vader as a little boy, confusing the heck out of them. You won't have to explain the switch between Padme and the queen. You don't have to try and make sense of the additional apprenticeships, like Obi-Wan being trained by Qui-Gon. (Sorry, Liam Neeson.)

Basically? You're going to save yourself a lot of talking and you won't have to sit through The Phantom Menace. You're welcome.