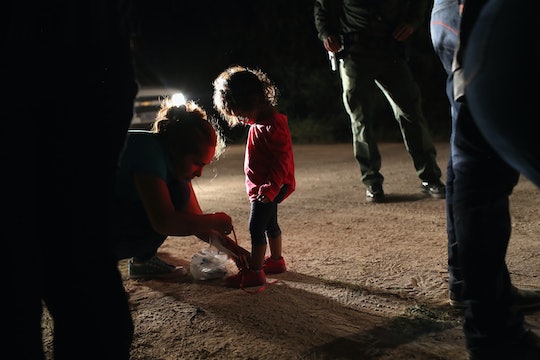 How To Find A "Families Belong Together" March Near You

Now that word has spread about the Trump administration's new policy of separating families on the Mexican border, many people are feeling compelled to do something to stop it. You've likely already seen articles about calling your legislators to tell them how you feel about the policy, which is always a good first step. But sometimes you feel like you should be doing a little more, which is why you might want to know how to find a "Families Belong Together" march near you to protest the separation of families at the border. Getting out in the streets with likeminded people will definitely help the situation in so many ways, but mostly it's about showing legislators that they have to no choice but to listen to their constituents on this issue.

Advocacy groups such as MoveOn, National Domestic Workers Alliance, and the American Civil Liberties Union have come together to plan "Families Belong Together" on June 30, which will be a huge march in Washington D.C. The organizations write that they're marching in protest of Trump and his administration's systemic criminalization of immigration and immigrants, the revocation of Deferred Action for Childhood Arrivals (DACA), and "ramping up intimidating ICE tactics."

Just like with the Women's March, there are sister marches happening all over the country if you're nowhere near the capitol, and you can find the details about your city just by entering a zip code. If there's not a march happening in your town, you can create your own — just make sure to do your due diligence and make sure there isn't some other march against the policy that was planned before MoveOn got their website together.

The march was announced Monday night by D.C. Rep. Pramila Jayapal on MSNBC’s All In With Chris Hayes. She said, "The end game is really to say, ‘This is about Trump.' Look, he would love to make this about — and you just quoted him — about Democrats. He would love to make this about legislation that has to be passed.” She added, "We see the outrage, and we see that this has to be taken right to the White House, right to Donald Trump, to stop the family separations."

Jayapal was referring to statements Trump has made on Twitter and in speaking engagements over the past few days blaming Democrats for the new policy of separating children from their parents and demanding that Congress pass legislation to fund a border wall and other "border security" measures.

Since 2014, hundreds of thousands of families have been fleeing gang violence in places like El Salvador, Guatemala, and Honduras, according to The Washington Post. American law allows for applicants to ask for asylum or refugee status. Under the Obama administration, the Justice Department prioritized deporting criminals above anyone else, as reported in The New York Times.

Just this past April, Attorney General Jeff Sessions issued a "zero-tolerance" policy to deport anyone trying to cross the U.S.-Mexican border, even families and children seeking asylum. Seeking asylum or refugee status is a legal thing to do — these people are fleeing violent, uncertain lives in their home countries, not committing a crime. So, it is illegal to charge people with one when they are simply asking for asylum, which is why the administration continues to deny that it is happening at all.

Sessions' zero-tolerance directive is what is causing families to be separated and he, or Trump, could easily stop this by issuing another policy directive to the respective agencies on the border stopping families, splitting them up, and detaining them. It's this denial of facts, and the perceived lack of humanity in taking children away from their parents, that people will be protesting on June 30.

According to Politico, Homeland Security Secretary Kirstjen Nielsen said in a White House press briefing on Monday that the there is no "policy of separating families at the border" and that they are just enforcing old laws. While there are laws about how to deport people who cross the border, none of them requires the administration to separate families to do so, as per The Washington Post.

Putting families on the deportation track, as reported by Vox, means separating parents and caregivers from their children. The Department of Health and Human Services, which takes over custody of a person once the Department of Homeland Security has processed them at the border, said in May that it had 10,773 migrant children in its custody, up from 8,886 on April 29, according to The Washington Post. That surge is due in large part to the zero-tolerance policy Sessions issued in April.

The issues around immigration are complicated and wrought with emotion. If you feel the urge to do something about what's going on at the border these days, joining one of the many protests at the end of the month is just the way to do it.