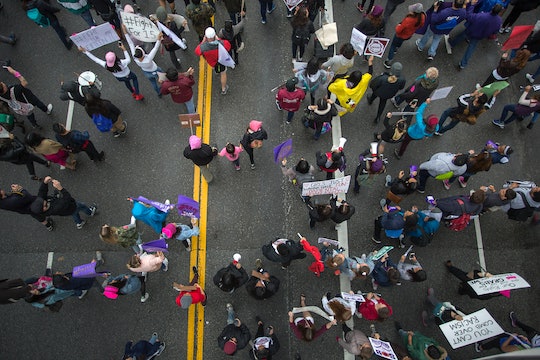 How To Find Your Local Women's Strike Protest

It's almost impossible to imagine what a day without women might look like. Maybe it's because I am a woman, and as soon as I start to think about going on strike, two feelings immediately hit me square in the chest: elation and terror, in equal measures. I think about what it would feel like to just say, enough. I've had enough. Just for a day. It makes me start thinking, I should do this. I should find out how to find a local women's strike protest. I should engage, I should join. I should support. And then I think about all of the mechanics of my day, all of the parts that need to keep the wheels of my world turning. It makes me panic.

But too bad. Because if the Women's Marches across the world in January taught us anything, it's this: Complacency is for chumps. This is no time to sit back and hope for the best. To get caught up in the daily details of our own lives. Which is why the organizers of the Women's March are planning A Day Without Women for International Women's Day on March 8 — a day when we all just... stop.

So what exactly is this strike protesting? The organizers of the International Women's Strike said in a statement:

In the same spirit of love and liberation that inspired the Women's March, together we will mark the day by recognizing the enormous value that women of all backgrounds add to our socio-economic system--while receiving lower wages and experiencing greater inequities, vulnerability to discrimination, sexual harassment, and job insecurity.

The "Day Without a Woman" organizers have laid out comprehensive details for how to get involved on their website (including a helpful template of a letter notifying employers of your intention to strike). Many of the protests take place in the United States and a select handful of countries, but organizers have offered these tips on how to be a part of the Women's Strike from anywhere on the planet:

Women take the day off, from paid and unpaid labor

Avoid shopping for one day (with exceptions for small, women- and minority-owned businesses).

Wear RED in solidarity with A Day Without A Woman

This new protest follows on the heels of the "Day Without Immigrants" movement on Feb. 16, when immigrants protested the Trump travel ban (an executive order effectively refusing citizens from seven Muslim-majority countries entry or political asylum in the United States) and the proposed wall between the United States and Mexico. Across the country, children were kept out of school, employees gave up wages, and employers shared messages of solidarity by taking on extra work or closing down for business.

Unfortunately, there was a backlash to the Day Without Immigrants. While some employers were hugely supportive of the protest, others were displeased, and hundreds of employees were fired for missing a day of work.

So how do you manage to protest, make sure you're heard, and still end up keeping your job at the end of the day? Close your wallet. Wear red. If you must go to work, then work. If you can take it off, take it off. Breathe. Engage with other women. Breathe some more. Don't clean your house (no one is advising this but I figure it's only fair). Do the best with what you've got.

It's really all any of us can do, and in the end, it will mean much more than you know.