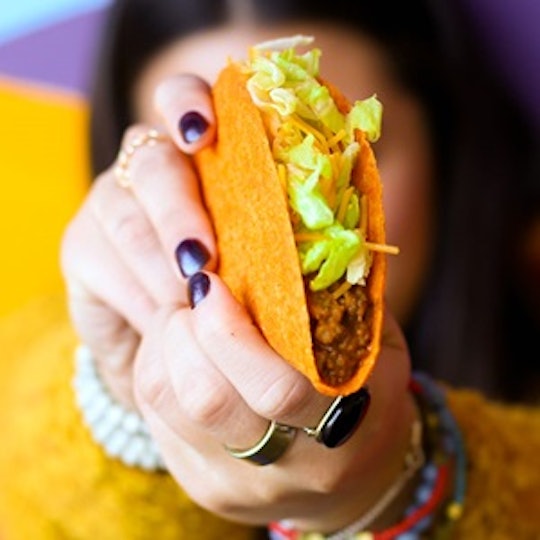 How To Get Free Tacos At Taco Bell In June

If you've always been a little curious about Doritos Locos Tacos, but refused to pony up a buck and a half for one, you're in luck; here's how to get free tacos at Taco Bell during certain days in June as part of the restaurant's Steal a Game, Steal a Taco promotion. Taco Bell is partnering with the NBA, which begins its series of finals games on June 1. If the traveling team "steals" a game, that is, wins on the opponent's home court, everyone in America gets a free taco.

You don't have to watch the games, know the scores, or identify any of the players in a lineup; you just have to know who won which games. "Crunch time during the NBA Finals has a whole new meaning," Chief Marketing Officer Marisa Thalberg said in a statement that made me irrationally angry. It is Taco Bell's position that "Whether you have a stake in the game, your team didn’t make it to the Finals or you don’t even typically watch basketball, everyone can cheer for free tacos and team Taco Bell." This is the second consecutive year that the company has run Steal a Game, Steal a Taco. Similar baseball-themed promotions have occurred in recent years, as well.

The Doritos Locos Taco consists of beef, cheese, and lettuce in a giant chip, and no substitutions will be made, so bring your own sour cream and guacamole. The only tricky part of the promotion is keeping track of the dates. If the "away" team wins Games 1, 2, or 3, you can get your free taco on Wednesday, June 13 from 2:00 p.m. to 6:00 p.m. (at participating locations, of course). If the "away" team wins Games 4, 5, 6, or 7, free taco day will be Tuesday, June 20. But the teams take turns hosting, so you'll need to know where they're playing, as well as when.

The Golden State Warriors are the first team in the Finals. The opposing team hasn't been decided yet; it's currently down to the Boston Celtics and the Cleveland Cavaliers. The Cavaliers are leading 3 to 1 in the best-of-four playoff series; Game 5 will be played on Thursday, and if necessary, Games 6 and 7 will be played on Saturday and Monday, respectively. The Golden State Warriors will host the first two games on June 1 and June 4, and the opposing team will host Game 3 on June 7 and Game 4 on June 9. If necessary, Game 5 will be in Oakland on June 12, the other team will host Game 6 on June 15, and then it's back to Oakland for the last game on June 18. Good luck to basketball and taco fans everywhere, and to those who prefer Netflix and pizza, you don't need any luck, because you've already won at life.