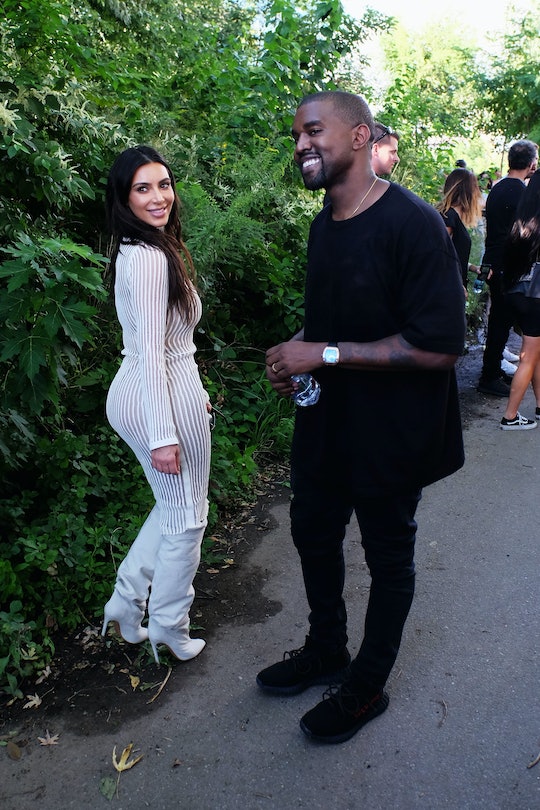 Kim & Kanye Want Your Kids To Have Designer Duds

Reality star Kardashian made the announcement in the most adorable way this week by having daughter North model it. Kardashian posted two Snapchat videos featuring North in a sparkly yellow dress and a yellow shearling coat, much like the adult Yeezy ones. The toddler rocked the look with high top Vans, but we're assuming her father would recommend a Yeezy Boost to complete the outfit.

In the caption, Kardashian wrote, "Kanye & my kids line coming soon! #SequinDress #ShearlingCoat.” The Yeezy Season 5 is debuting at New York Fashion Week later this month, so it's very possible that the kids' line will also make an appearance on the runway.

The new line is totally inspired by North and she even had a hand in its creation. As Kardashian explains in her video, "Daddy and mommy are doing a kids' line and these are some of the pieces. Northie picked out the colors and the fabric."

Yeezy for kids will be designer, and likely very expensive. Right now, you can buy West's clothing line on his website and through boutiques or department stores like Nordstrom's, so it's a safe bet that the children's line will be available at those places, too — whenever it's ready, that is.

This venture isn't exactly a new one for the couple. Late last year, Kardashian hinted on her website that she was working on a children's line when she posted images of a little mini Ralph Lauren jacket and a custom bomber jacket for Saint.

Last year, the couple also released Yeezy Boosts for children, and just this past September, Kim launched a children's clothing line with her sisters called Kardashian Kids. Those clothes are available at Babies "R" Us, Lord & Taylor, Zappos, Nordstrom.com and Hudson's Bay Canada, and are really affordable. They have pants with suspenders, little lace dresses, sparkly sweatpants — everything you'd see a Kardashian-West or Kardashian-Disick kid wearing, basically, but with a much less terrifying price tag.

So if you can't spring for the designer Yeezy sequined little kid dresses when they debut, you can still doll your infant and toddler up to look like a member of the Kardashian clan anyway.