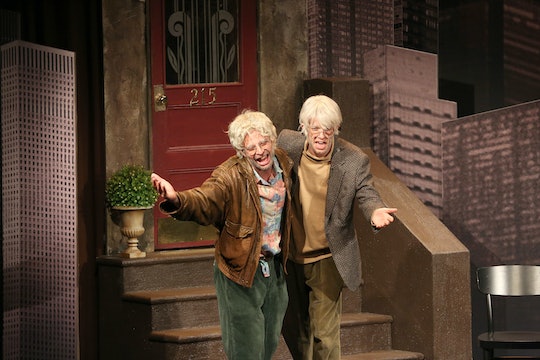 How to Get 'Oh, Hello' Tickets, Since You Probably Won't Actually Get To See Them On 'The Bachelor'

Everyone can use a little help when it comes to love, but after Nick Kroll and John Mulaney claimed that they would be advisnig Bachelor Ben tonight, everyone was clamoring to find tickets to their show, Oh Hello, too. Yes, that's right: The two comedians reported (humorously) that they would be assuming their Gil Faizon and George St. Geegland characters to help Ben Higgins get the girl on The Bachelor Monday night — which seemingly ended up being a little bit of an overreach, of course, since they only paid a visit to the after-show, Bachelor Live. (*sigh* Did we really expect anything else?) It's probably for the best — if you thought Kevin Hart and Ice Cube had some strange ideas about romance, just imagine how Ben would have reacted to Faizon and Geegland.

Oh, Hello is an off-Broadway show based off the comedians' prank sketch "Too Much Tuna" on The Kroll Show. When they took the idea to New York City for a three-week run this December, it was all the rage. And it was very hard to get tickets for — if only because, according to their website, "tickets are a lot of money." But have no fear, comedy lovers everywhere: The comedians are taking their show on the road!

Right now, you'll be able to see them in San Diego, California on Jan. 21; in Boston, Massachussetts from Jan. 31 to Feb. 2 and 5. They'll be in Washington, D.C. from Feb. 14-15, San Francisco on February 29 and March 1, and Chicago, Illinois from March 20-22. Tickets aren't that much more than your average concert depending on the venue and the specific seats, but they can also go up to a hundred bucks.

You might not even get the chance to spend that much if the show's history is any indication — each previous performance has been nearly sold out and Oh, Hello fans apparently like the good seats. (You can get tickets for around $30 in D.C., for example, but you'll have to sit in the way, way back.)

If you can't get to a show, you can still check out old clips of the duo on The Kroll Show from all over YouTube. The Cherry Lane Theater in New York did some promotional clips of the show, too.

Already, those lucky few people who had luck in obtaining tickets are celebrating accordingly on Twitter:

Oh — and one more thing to remember: The comedy duo's content might be a little perplexing to the average Bachelor fan. Their brand of humor is a little, well, weird. We're talking about two very old, particular old men offering advice to the dreamy Ben Higgins. According to the fictional bios on the Oh Hello page, one member of the duo, Gil "currently works as a stand in model for mashed potatoes and other creamed foods."

Even show creator Mulaney seemed a little worried about how the comedy duo's fake advice might go down on Monday night, tweeting this gem:

Their advice can't be more awkward than a hot tub date in a hot tub store, can it? I mean... it could be.