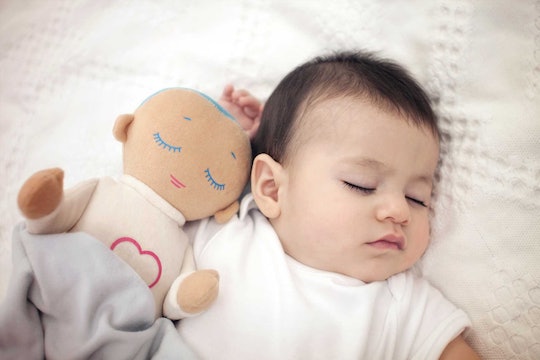 How To Get The Cult Favorite Lulla Doll Before It Sells Out... Again

For some parents, the Lulla Doll is a crucial part of their child's bedtime and naptine routines. Because it has already sold out once, knowing how to get the cult favorite Lulla Doll is crucial information for these caregivers. Some unique, soothing features in the doll have helped make it an in-demand item among children and parents alike, although not everyone is in love with the plush sleep aid.

After selling out only two weeks after its release, the Lulla Doll ($69, Lulla Doll) is again available for purchase on the company's website. Please note the shipping costs are calculated separately, and the price does not include local taxes. If time is of the essence, you may want to double-check shipping times as well.

If you're curious about getting the Lulla Doll, it's in your best interest to act fast. When the doll's initial run of 5,000 units sold out shortly after its release, supply and demand drove the aftermarket price sky-high. In fact, one Lulla Doll sold for $665 on Ebay. That said, there's no guarantee that the current run will sell out, but it's helpful to keep in mind the doll's past demand. It's machine-washable and stands up to laundering in hot temperatures for sanitization purposes. Plus, the crib attachment (which keeps it in place for babies under one) makes it suitable for newborns and infants.

What makes the Lulla Doll such a hot item? It is built to help babies and young children sleep better. Developed over the course of three years with input from doctors, nurses, psychologists, midwives, engineers, and baby testers, the Lulla Doll is designed to help children fall asleep. Originally designed to give premature babies a sense of comfort and closeness, the doll uses real-life recordings of a mother's heartbeat, as well as realistic breathing sounds, to give babies a feeling of closeness. And if the parent holds the doll first, then the baby may find further comfort in toy imbued with their parent's scent. All these stimulants, as well as the plush's soft touch, are all intended to soothe and de-stress babies.

Many caregivers have found that the Lulla Doll actually does work wonders. According to reviewer Elizabeth K, her 11-month-old baby had a tendency to wake up every 45 minutes at night and go without naps. It drove her to desperation. But within a week of using the Lulla doll, Elizabeth's baby slept 13+ hours a night and took two naps a day. "I don't know how I would have survived without Lulla," shares Elizabeth K on the brand's site. Amazon reviewer Ben and Larissa had a similar experience. After co-sleeping, sleep training, and even working with a sleep consultant, Ben and Larissa's baby still woke up four to six times a night at 14 months old. "I've been really impressed with how helpful this doll has been . . . much more so than some of the other soothers we bought," said Ben and Larissa.

That said, not everyone has had such a great experience with the $70 item. "The doll made no difference in my child's sleeping pattern... this was a waste of money," said one Amazon customer. And Meena Hart Duerson of TODAY said, "On average, I'd say it took him about the same time (and fussing) to fall asleep with the doll as it does without the doll, so I'm not sure that it had any impact."

What's also worth noting is that both positive and negative reviewers frequently referred to the doll's breathing sound as "creepy," and many of them likened it to Darth Vader.

So the doll's effectiveness as a sleep aid appears to work in some cases, but not others. As with many things baby-related, your mileage will vary in terms of the product's effectiveness, but when you're sleep deprived, anything is worth trying.

More Like This
The Dads In Your Life Are Going To Love These Father’s Day Cards
19 Gifts College Grads Will Love & Actually Use
20 Best Gifts For Stepmoms
From Captions To Gifts, These Are All The Kindergarten Graduation Ideas You Need