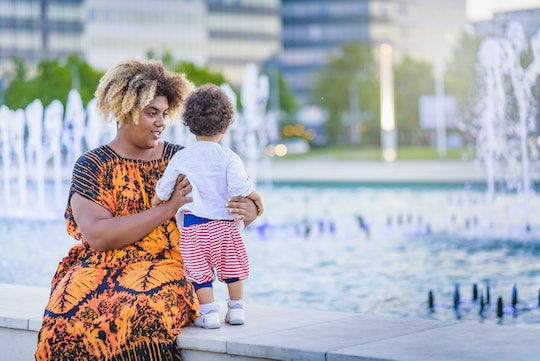 How To Show Your Toddler You Mean Business *Without* Yelling

Parenting a toddler is such a hilarious, joyful, and generally adorable experience. It can also push you to such intense levels of agitation you will want to tear your clothes off Hulk-style and scream like you are shooting lava directly from your throat. While no parent wants to lose it and shout at their little one, sometimes it feels difficult to show a toddler you really mean business without yelling or getting angry. It can seem like the ultimate test in self-control, like an American Ninja Parent Warrior, where the only challenge is watching your child drop your phone into the toilet and not once raising your voice.

It's now well-established and understood that spanking or physically reprimanding a child is a gigantic no. But many parents might not realize that shouting at kids can be just as bad as hitting. As reported by the New York Times: "A 2014 study in The Journal of Child Development demonstrated that yelling produces results similar to physical punishment in children: increased levels of anxiety, stress, and depression along with an increase in behavioral problems."

Oh and also? Shouting at toddlers does not work.

"We know from years of research that yelling is an ineffective form of discipline. Not only do kids switch off and become far less likely to listen to what you’re saying, it can also really damage your relationship with them," says Sarah Ockwell-Smith. Ockwell-Smith is a UK-based parenting expert and author who specializes in what she calls "gentle parenting." She has a series of "gentle"-themed books: The Gentle Discipline Book, The Gentle Sleep Book, The Gentle Eating Book, etc. and that translates into her advice. Ockwell-Smith tells Romper that toddlers who are regularly yelled at will not only not improve their behavior — but the behavior will actually get worse. "Plus, and perhaps most importantly, they learn to yell too, and perceive it as a good way to communicate with others. So you continue a negative cycle."

So how to get through to a 2-year-old, and let them know that this isn't a game, you aren't joking, and your shoes really do not belong in the toilet?

"The best way to encourage a toddler to listen to you is to firstly get down to their level," says Ockwell-Smith. "Kneeling or squatting so you can look directly into their eyes, then calmly put a hand on their shoulder and encourage them to look at you. Make sure you compose yourself first. Your toddler will be able to sense your anger and will be far less likely to want to engage with you."

But... we are all but human, and we are tired humans at that. And sometimes we are going to lose it, and our voices might raise a bit above normal speaking volume. (And obviously there are some instances where shouting is a safety issue and necessary — if a child is about to run into the street or touch a hot stove, by all means bellow away.)

But if we just generally lose it and shout, well then what? How to recover from the situation, and not hit yourself in the face with a frying pan for being the worst parent ever? Ockwell-Smith says that if yelling does occur: "First and foremost, apologize. Tell your child that you are sorry and you were wrong. Try to make things right and reconnect with a big hug."

She also has a gentle reminder for parents. (Of course she does.) "You should also take it as a sign you probably need to work on some self care. Making some headspace and finding a safe way to diffuse is important so you don’t lose it at your child again. But, every day is a new day — it’s never too late to vow to reduce your yelling and follow a gentler discipline style." So get some extra sleep when you can, make sure you're eating real meals and not leftover remnants of frozen chicken nuggets, and make room to care for yourself so you can be the parent you want to be.