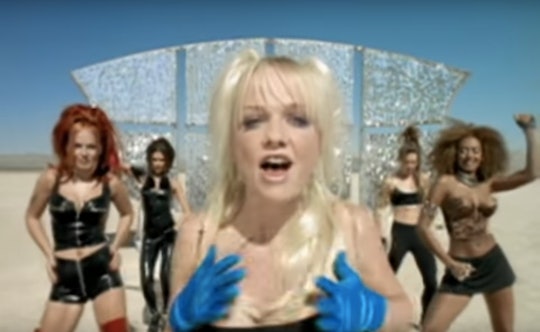 How To Get Tickets To The Spice Girls Reunion Tour, Because You Really, Really Want 'Em

Do you remember learning all of the Spice Girls dance moves in your bedroom? Preferably with a best friend or two to provide a truly synchronized look? Of course you do, and you're going to want to dust off the old routine in the near future. Because there are rumors afoot of a possible reunion, and you're going to want to get tickets to the Spice Girls reunion tour come hell or high water.

For years, our five favorite Spices have refused to give fans the one thing we so desperately, achingly, really, really want. A reunion. A chance to go back to the '90s or even the early 2000s and fully embrace our inner Girl Power. To bring back Union Jack bodysuits, full on catsuits and just... well, just fun. There have been glimpses along the way, consistent rumors that yes, this might finally be the year when Posh Spice, Baby Spice, Ginger Spice, Scary Spice, and Sporty Spice (or as some call them Victoria Beckham, Emma Bunton, Geri Haliwell, Melanie Brown, and Melanie Chisolm) might get the girls back together. There were hints that it might happen, and yet nothing ever came of it. Until now, that is. TMZ confirmed on Wednesday that the Spice Girls are planning a world tour, and yes, they're planning on coming to the United States.

Rumors of a possible reunion hit a fever pitch on Friday, when Geri Halliwell (whose married name is Geri Horner) shared a super rare picture of the five women at her London home. She captioned the photo:

Love seeing the girls. #girlpower is alive and well

We reminisced about the old times, we were talking about the kids, it was lovely. And then we all sat around Geri’s table and we got takeaway in, got sushi and some salads and drank tea and a little bit of prosecco. It was just so lovely to see everyone. I loved it, really good fun’.

So yes, it all seemed very relaxed, just a few gals getting together for some takeaway. Until they released a statement via Beckham's publicist Jo Molloy which read, according to Entertainment Weekly:

We have enjoyed a wonderful afternoon catching up and reminiscing about the amazing times we have spent together. We are always overwhelmed at how much interest there is across the whole world for the Spice Girls. The time now feels right to explore some incredible new opportunities together.

Then Posh Spice herself, who has reportedly been the holdout for a reunion, shared a few snaps on her own Instagram with the girls and their former manager, Simon Fuller.

In other words, guys, for the first time since their epic reunion at the closing ceremonies of the 2012 Winter Olympics in London, the girls are going to be getting back together. Reportedly for a world tour, though no dates have been confirmed as of yet, according to Metro.

A source close to the girl band told TMZ that the rough plan at the moment is for the tour to begin in England and then travel overseas to the U.S. this summer. You read that right. This. Summer. Sadly, no tickets are available yet because the planning is in the earliest stages. But stay tuned guys; the minute Spice Girls reunion tour tickets are available, I'll let you know.

The time is truly ripe for a Spice Girls reunion. Girl power needs a little boost, and who better to encourage women to band together than the women who told us, in no uncertain terms, that "Friendship never ends?"