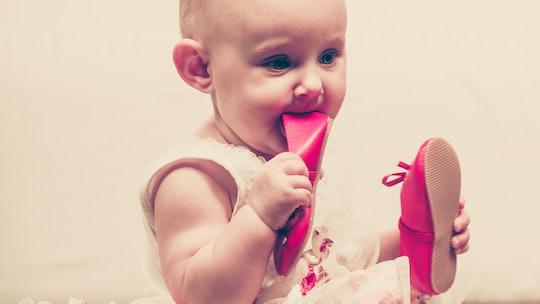 Baby shoes. Some of the cutest, most adorable accessories your baby can wear — while simultaneously being a source of great frustration and buyer’s remorse. As soon as you put those cute little baby-sized Chuck Taylors on your child's feet, it seems like they have them off and are throwing them across the room in a matter of seconds. When did your baby get so strong and nimble with their fingers? Because you don’t want your hard-earned money going to waste, you may be wondering how to get your baby to leave their shoes on. They really complete the outfit, you know?

Dr. Natasha Beck, a clinical psychologist who specializes in neuropsychology, says the earlier you expose your baby to shoes, the better. “Providing children with repetition and consistency is key to most things, as that provides comfort and a general sense of expectation for them,” she tells Romper in an email interview. So when exactly should you start to introduce your baby to shoes? Beck says, “Anywhere between 3 to 6 months is best to start, but they should be soft sole shoes. The idea of wearing shoes at this age is just exposure, not having them stand up or trying to walk.” Beck also adds that the explanation of wearing shoes is also important. “Telling your baby, ‘we are putting our shoes on to protect our feet when we leave our home,’ is important to say every time you put shoes on. Also narrating to your baby when you put your shoes on helps model to your baby that you put shoes on too when going out.

Kate Orson, Hand in Hand Parenting instructor and author of Tears Heal: How To Listen To Our Children, adds another method that works for older babies. She tells Romper that she calls it “Giggle Parenting,” which “uses the power of laughter to build cooperation with your baby.”

“So if a baby keeps throwing off their shoes, then we can act playfully frustrated in a very friendly and warm way. So we could tell them, ‘No, no, no, please don't throw them off',’ and then give them back after they have thrown them and ask them again. If this gets them laughing then that's actually a good thing. We can follow the laughter, playing the game for as long as our baby is amused by it,” Orson explains. Orson says through laughter, play, and connection, the novelty of the “game” will wear off eventually, and they’ll be happy to keep their shoes on.

Orson calls this type of parenting investment parenting. “Connection builds cooperation, so when we connect with our babies and children, then they are more likely to cooperate with us. And we will be amazed that even younger children and babies can often understand what we want them to do, and cooperate with us when they are feeling connected,” she explains.

After a while, when our baby feels connected to us, through laughter and play, the novelty of the game will wear off and they'll probably be happy to keep their shoes on, Orson says.

As far as why our babies love to throw their shoes off, Beck says there are several reasons. The first of which is kids just like the idea of holding their shoes in their hands. Beck suggests providing something else for them to hold instead, like a teething toy or a lovey. Second, your baby may be testing you, frustratingly enough. So again, bending down to their level (or squatting down while they are in their stroller) and explaining why we keep our shoes on and modeling the behavior can help with this, Beck says. Another reason could be your child has sensory difficulties, and has sensitivities to different textures. Beck suggests having some breathable shoes and comfortable socks to help.

Does the type of shoe matter as far as getting your baby to keep them on? What’s the timeline for proper footwear for infants? According to Beck, while it’s important to introduce your baby to soft sole shoes as early as you can to get them used to it, hard sole shoes shouldn’t be worn until your baby is able to walk while holding on to either furniture or an adult’s hand. “Soft sole shoes will not impact your child’s foot growth, but should not be worn all day, rather only when going out,” Beck recommends. Beck also notes that it’s recommended to not force your baby to stand up — while wearing shoes or not — until they are able to stand on their own as it may cause their feet to turn inward and put stress on their hips. Babies typically begin to stand around 7 to 13 months, according to Beck. “It is also very important when they are learning to stand up/walk that they get plenty of time not wearing shoes [while doing so]. Feeling the ground gives them a sense of security. It’s all about balance and moderation,” she says.

So it looks like the earlier you introduce your baby to wearing shoes, the higher of a chance they won’t constantly throw them off because they’ll be used to it. Making it a game and explaining (as much as you can explain to a baby) why we wear shoes may help, too. Distracting their hands with something else to hold may keep their hands busy enough to not grab their shoes and toss them on the floor. Happy shoe shopping.