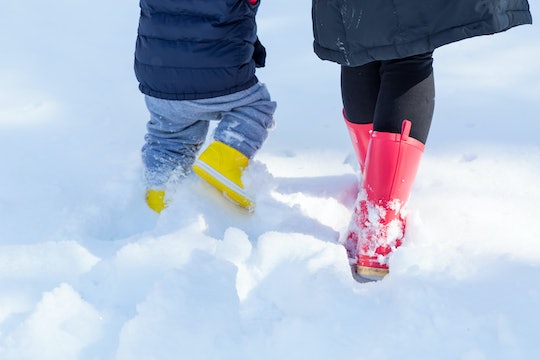 My kid refuses to wear socks, and has refused since he was an infant. As soon as I put them on his feet, they're off in a flash, and I'm starting to worry about the cooler weather. Knowing how to get your toddler to wear their boots seems pretty important, because I'm sure my son will be yanking those off as well. He's a free spirit, y'all. (That's what I'm telling myself anyway.)

The trick is to make your toddler want to wear their boots. And podiatrist Dr. Tammy Gracen says the best way to get your toddler to want to wear their boots is to let them select their own. “There are so many styles that appeal to young ones that the bigger problem is going to be taking them off,” she says. In fact, Target usually has some amazing kid-sized boots, as does Old Navy, H&M, Carter’s, and of course Amazon.

Additionally, Katie Ziskind, a licensed therapist, tells Romper in an email interview that it’s natural for children to want to take shoes off, just like they love to take clothing off and have “naked time.” But to have a better chance of your child keeping those boots on, Ziskind says, “Your toddler needs to get familiar with their shoes and think they’re really exciting to wear in order to want to wear them.” She also suggests reading books from the library about children wearing rain boots and having fun jumping in puddles “so your child will feel like wearing rain boots is socially appropriate.” There are also books about children playing in the snow and having fun (while wearing their boots), so those may be a good idea, too.

“You could also get a doll or stuffed animal from Build-A-Bear that has boots, which can make your child feel excited about wearing theirs. Children can then learn to take the stuffed animal’s boots on and off,” Ziskind adds. And not only is playing with the stuffed animal and their boots helping them get excited about wearing their own, but it’s a positive activity for their growing imagination, Ziskind says. She also suggests getting matching boots with your child and going out together wearing them. “It’s a very exciting thing for them to wear the same pattern of boots," she says.

Though there isn’t much support for your toddler’s feet in boots, wearing them still won’t affect their development and they’re OK for their growing feet, according to Gracen. “Toddlers have large fat pads on their feet, so impact will not be a problem. Their feet are still strengthening so this is really no different than allowing them to go barefoot in the house, which is good for muscle development,” she says. “As far as sizing, I would not go more than one size above their given size as the boots will slide around on the foot causing friction problems, as well as increasing the likelihood of a fall.”

So let your toddler pick out their boots, and you'll definitely have a better chance of them wanting to put them on. It's even better if you have the same pattern on yours — they'll love to match. If all else fails, some preparation work with library books about kids wearing boots, whether in the rain or snow, and buying stuffed animals with their own boots you can take on and off will more than likely warm up your toddler to the idea. Good luck, and happy puddle jumping and snow frolicking.